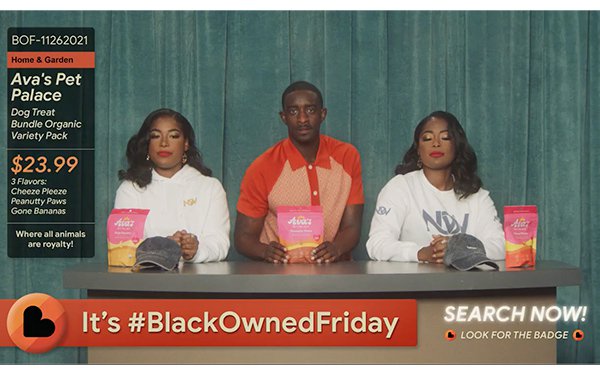 Google has turned the biggest spending day of the year into one that supports Black-owned businesses.

The company partnered with U.S. Black Chambers for the second year to reimagine Black Friday as Black-Owned Friday -- a day to search, shop and support Black-owned businesses.

“When I founded Nappy Boy Entertainment in 2005, I had no idea all the directions it would go,” T-Pain wrote in a post. “What started as a record label now includes a podcast, gaming, and a book — I’m proud of this business. Along the way, I’ve developed a true passion for small businesses, and I admire the hard work it takes to make them successful.”

The video comes to life in a shoppable music film that features more than 100 products from more than 50 Black-owned businesses.

The products that serve up in the video appear as soon as each appears in the film. "To supplement this, there is a page off of the microsite that has all of the products listed, which are listed in alphabetical order by product type such as art print, books, sunglasses, and more," a Google spokesperson said.

It turns out Black-owned businesses were especially hit hard during COVID-19.

An estimated 41% were forced to close their doors in 2020 in the United States, compared with 17% of white-owned businesses during the same time, according to an August 2020 report from the Federal Reserve Bank of New York.

Google's format highlights the shoppable film as an extension of how the company provides technology to connect businesses with consumers with clickable products popping-up as they appear in scenes.

There are featured businesses and products in the video where people can click through to buy the items.

Some of the businesses found in the shoppable film include People of Color, Redoux, Rep.Club, and Sweet Dames. Google chose businesses that have a major ecommerce presence within popular product categories.

Google began making it easier to find Black-owned businesses in July 2020. The company launched a tool that allows businesses to identify themselves as Black-owned through the company’s Maps and Search listings.

The feature is part of the company’s pledge announced in June 2020, to support the Black community.

When searching for a business through Google Search or Google Maps, consumers will see a badge — it’s a black heart over an orange three-striped background, which represents Black-owned businesses.

Google introduced similar badges in 2018 for businesses to display if they were woman-led or members of the LGBTQ+ community.