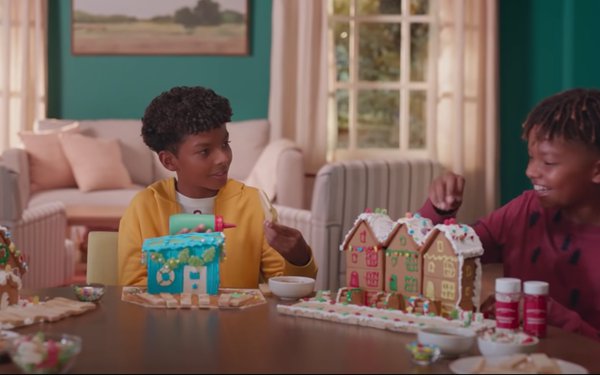 It doesn’t look like Target expects any coal in its stocking. The company is swinging into the holiday season on a high note after delighting retail observers with financial results that surpassed expectations. The company says it’s confident it will keep on winning through the quarter ahead, outsmarting supply chain snags and labor woes.

The Minneapolis-based retailer says comparable sales in the third quarter rose 12.7%, on top of a 20.7% jump last year. Those gains, driven entirely by traffic, came across all categories, with sales in all five of its core areas rising in the double digits. The best performances came in essentials, beauty and food and beverage categories.

Even more impressive was the growing muscle in same-day services, including Shipt, Order Pickup and Drive Up. Those transactions soared 60%, following last year’s 200% gain. And more than 95% percent of third-quarter online sales were fulfilled in stores.

CEO Brian Cornell said those robust gains show that extensive investments in omnichannel retail are paying off, solidifying relationships with consumers who appreciate the many shopping options available to them.

“Those bonds have never been stronger,” he said on a conference call webcast for investors.

Based on those gains and its relatively healthy inventory levels, Target upped the forecast for the fourth quarter. It now says it expects high-single-digit to low-double-digit growth in comparable sales.

Company executives also called out the effectiveness of the brand’s positioning, as playful as it is inclusive. “Joy, ease, value and inclusivity—these ingredients are helping us deliver on our purpose,” said Christina Hennington, executive vice president and chief growth officer, on the call.  “It’s a recipe we’ve been refining quarter after quarter by listening to our guests.”

Partnerships continue to act as growth engines, with the retailer's new Ulta stores “hitting the bullseye,” Hennington, says. Target also plans to triple the number of Disney units in its stores and double the number of partnerships with Apple. It’s also readying the December launch of a new lifestyle partnership with Lego.

“This is a remarkable level of growth that firmly cements Target as one of the most successful retailers in the country,” writes Neil Saunders, managing director of GlobalData, in his note on Target earnings. Given its 222% gain in digital sales since 2019, the chain is “one of the fastest-growing mainstream retailers in the digital space,” taking a significant amount of online share.

He says Target’s success is due to its appeal to consumers, many of them with extra cash in their pockets, given still-subdued spending on travel and entertaining.

“Spend is being diverted into personal treats, and Target is one of the main beneficiaries of this trend,” he writes. “Unlike rivals such as Walmart, [Target's] more fashionable offerings provide consumers with a sense of indulgence – especially in categories such as apparel, beauty and home.”

Target also outlined improvements in its hiring practices, including offering industry-leading debt-free tuition programs and paying premiums for working during busier times. Bucking an industry trend, it says turnover in its hourly workforce has fallen below 2019 levels.