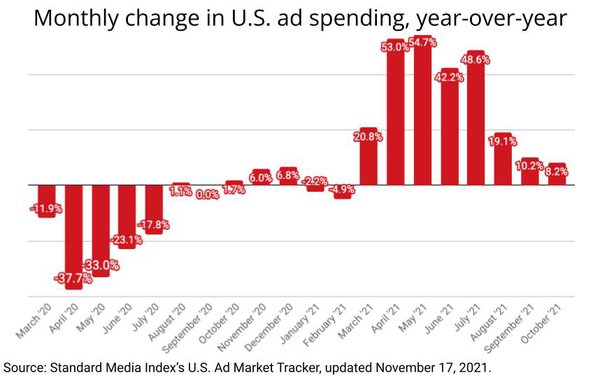 U.S. ad spending expanded 8.2% in October vs. the same month a year ago, according to a MediaPost analysis of the U.S. Ad Market Tracker, a collaboration of Standard Media Index (SMI) and MediaPost tracking aggregate spending data pooled by the major agency holding companies and big independent agencies.

It represents the seventh consecutive month of expansion for the U.S. ad economy, which sustainably pulled out of the COVID-19-triggered recession in March, and has demonstrated healthy growth ever since.

The rate of that expansion, however, has been decelerating for the past several months, and October is the first to fall below double-digit growth.

The U.S. ad expansion continues to be driven by smaller advertisers, with the top 10 categories expansing only 1.6% in October, while all others rose 18.1%, according to MediaPost's analysis of the index data.

While the index does not disclose explicit category-level data, SMI's own analysis finds that two of the biggest -- automotive (-17%) and consumer packaged goods (-10%) -- were among the biggest laggards in October spending, but SMI analysts pointed out they were also categories that spend "heavily" in sports, a genre that experienced big TV event cancellations in October 2020, such as shift in the NBC finals coverage.

On the other hand, the entertainment and media category, which includes a rebounding theatrical release marketplace, had $200 million in incremental ad spending in October vs. the same month in 2020, though it still is "shy of 2019 investment levels," according to SMI.

Among the major media, digital options continue to expand faster than "traditional" ones such as TV, though SMI noted that out-of-home ad spending surged 60% in October.

And while digital's overall expansion appears to be decelerating, SMI analysts noted that Facebook remains a big beneficiary from the expansion of social media, with ad spending on the platform surging 22% in October.