Another Blow For Reality: Metaverse Apps Forecast To Hit $1.6B In 2022 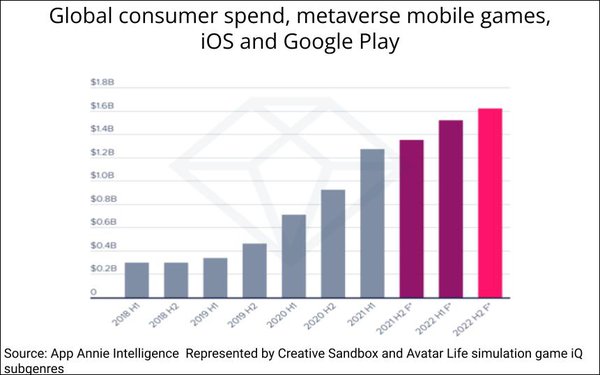 It’s enough to change Mark Zuckerberg’s perennial scared-rabbit expression to a smile — and heighten anxiety among those who think that encouraging ever-deeper flights from reality is the last thing the world needs at this juncture.

Global consumer spending on “metaverse” mobile game apps will reach more than $1.3 billion this year, and leap to more than $1.6 billion by the end of 2022, forecasts App Annie Intelligence.

“Smartphones give users the ability to participate in a metaverse from their fingertips, cementing mobile’s role as a linchpin for this sector of gaming,” say the app-tracker’s analysts. “In 2022, world-building functionalities that allow users to interact in real time through virtual avatars will captivate audiences and capture share of wallet.”

The gaming industry is evolving quickly, and “player empowerment is at the heart of the next wave of innovation,” they add. “Play-to-earn models — games that allow players to monetize in an open economy — combined with metaverses that emphasize players’ self-expression, will be the biggest drivers of mobile gaming innovation in 2022.”

Through October this year, Roblox, one of the most well-known metaverse apps, ranked No. 1 worldwide under “Simulation > Creative Sandbox” games by both downloads and spend across iOS and Google Play. Minecraft followed closely, ranking No. 4 by downloads and No. 2 by spend.

Other dominant mobile trends for 2022, according to App Annie:

TikTok is poised to become even more powerful, with the addition of shopping capabilities.

The phenomenal video app will reach 1.5 billion monthly active users (MAUs) next year — just 34 quarters after launch — despite having been banned in India, one of its top-growth markets, as of June 2020. In comparison, it took WhatsApp Messenger 42 quarters from launch (or nearly two years longer) to reach that milestone.

With its broad reach and high engagement, TikTok is already siphoning ad dollars, as well as consumer time, away from video streaming — and its push into shopping will making it an even more disruptive and “genre-blending” force in 2022. 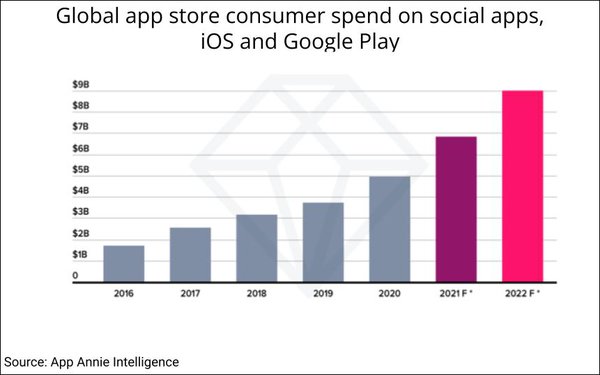 TikTok, Twitch and Bigo Live held the top three spots among social apps by global consumer spend through October 2021. All three have monetization strategies that use live-streaming elements to support content creators.

“Authenticity, creativity and video-first content is central to a social experience in 2022,” stresses App Annie. “With social apps poised to command nearly half of all time spent in mobile, this is a sector to watch for partnerships, marketing and customer engagement.”

Pinterest and Temple Run 2 will join the “billion downloads club.”

That will bring the total number of apps with 1 billion or more lifetime downloads to 22, including Pinterest at 1 billion and TikTok at 3 billion. In the games sector, Temple Run 2 will become only the third app to reach the 1 billion mark —after Candy Crush Saga and Subway Surfers. (The latter is set to hit 2 billion, making it the most popular mobile game of all time.) 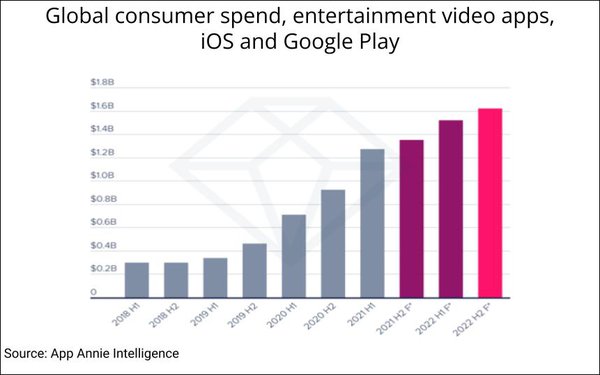 At the same time, video streaming entertainment apps will continue strong growth: Fueled by in-app subscriptions and the convenience of managing them through mobile, consumer spending on these apps across iOS and Google Play will reach $12 billion in 2022 — doubling 2020’s $6 billion total.

Hulu was on track to reach $1 billion in lifetime consumer spend as of Q1 2021, fueled by the U.S., and YouTube reached $3 billion in October, as consumers opted for ad-free and mobile-first steaming. 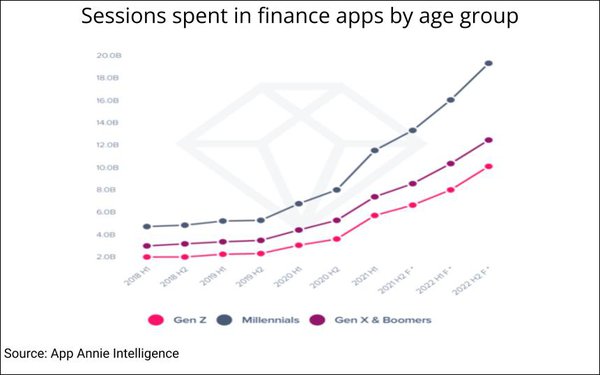 Crypto has been a significant driver of increased fintech app sessions in 2021, across age demographics, and sessions are forecast to hit 18.9 billion next year -- up 155% from 2020.

Among U.S. Gen Z and Millennial users, the top three crypto-trading apps by time spent on Android phones as of this September were Robinhood, Coinbase and Webull Stocks. Gen X and boomers also spent more of their “crypto-time” in these three apps.

While these apps also ranked in the top 15 by time spent for the Gen X/boomer audience, those age groups still favored spending time in more traditional apps like TD Ameritrade, Chase Mobile and IBKR.

Next year will present an unprecedented opportunity to engage and build loyalty among Gen Z — a mobile-first generation on the verge of financial independence—via these apps.