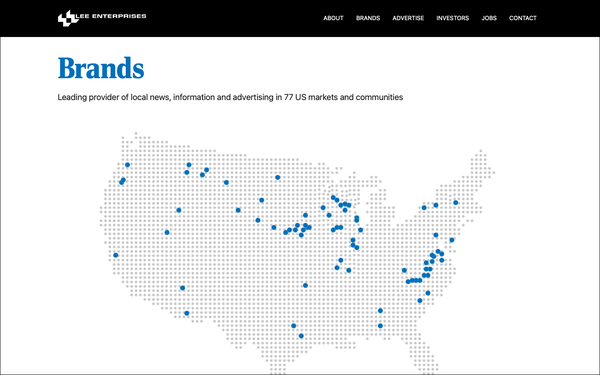 In an offer made public today, Alden offered Lee shareholders $24 per share, a premium of about 30% over Lee’s closing price of $18.49 on Friday.

The proposed deal values Lee Enterprises at about $141 million. The stock rose sharply by midday on Monday, trading at $22.79, an increase of more than 20%.

Alden, which already owns 6% of Lee, said it would fund a transaction in cash. Lee, based in Davenport, Iowa, owns 75 daily newspapers, including the Buffalo News and the Richmond Times-Dispatch, as well as more than 350 weekly and specialty papers.

Alden, which acquired Tribune Publishing earlier this year, is widely viewed as a “vulture capitalist” investor, buying poorly performing American newspapers, stripping them of resources and mining for profits.

In a letter to the Lee Enterprises board, Alden said: “We believe that as a private company and part of our successful nationwide platforms, Lee would be in a stronger position to maximize its resources and realize strategic value that enhances its operations and supports its employees in their important work serving local communities.

"Our interest in Lee is a reaffirmation of our substantial commitment to the newspaper industry and our desire to support local newspapers over the long term.”

According to Alden’s letter, scale is critical for newspapers to ensure staffing and thrive as print advertising continues to decline and back-office operations and legacy public-company functions remain bloated. This deprives newsrooms of resources, Alden said.