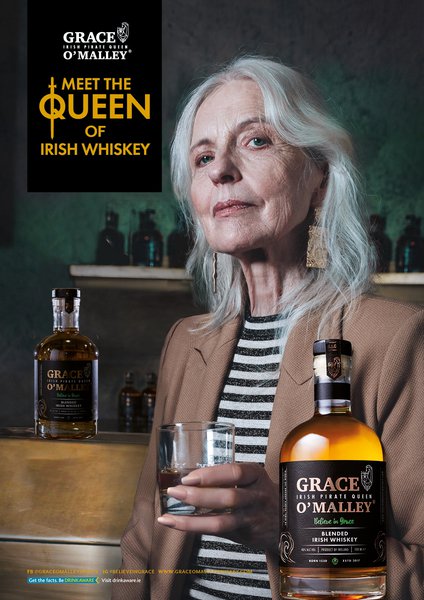 Grace O’Malley Irish Whiskey’s campaign, “Meet the Queen of Irish Whiskey” was developed in-house and features online, OOH and POS materials which use images of contemporary women to extol the spirit of the 16th century seafarer, clan chief and female trailblazer. The target audience is 24- to 45-year-olds of both sexes.

“We are not trying to create a female-only brand but rather include everyone in the conversation around whiskey, break down the stereotypes of what a typical whiskey consumer is, and take away the snobbery that can surround the category,” said Heather Clancy, brand manager for Grace O’Malley Spirits.

Grace O’Malley, distributed in the U.S. by MHW, debuted two years ago.

Another two-year-old brand, Fighting 69th Irish Whiskey, has launched a cocktail recipe contest for U.S. military veterans, with the prize  a trip for two to the 2022 St. Patrick’s Day Parade in New York City, which the U.S. Army’s Fighting 69th Regiment has led off since 1851.

“The whiskey is produced in conjunction with the 69th Infantry Regiment Historical Trust and a portion of the sale of each bottle sold benefits the trust as well as philanthropic activities on behalf of the Regiment’s veterans and families,” noted Scott Reid, the brand’s chief marketing officer.

Meanwhile, Kinahan’s, around since 1779, has introduced nine brand ambassadors in its virtual metaverse, each created by Swiss based Generation 7 Group (G7G) in a character and style representing a specific spirit.

For example, Heritage Single Malt ambassador Florence is described as “bold, resilient and hardworking. Very determined and never afraid of a challenge. Loves rare, handcrafted collectable objects and unique pieces of art.” She’s quoted as saying, “I have an ego because I have earned it.”

“Building meaningful relationships with consumers is an integral part of our brand longevity,” commented Kinahan director Zak Oganian. “Implementing new technologies is going to be a journey of trial and error. Once we get it right, the next generation of whiskey drinkers will enjoy a new enriched reality”.

Kinahan said its metaverse projects will also include digital whiskey casks and other branded items created in collaboration with NFT artists.

Amber Beverage, which already owned or marketed hundreds of spirits brands but not whiskey, did not disclose the price it paid for 22-year-old Walsh, whose brands include The Irishman and Writers’ Tears.

In announcing the deal, Amber noted that sales of Irish whiskey grew 140% from 2010-2020, according to the Irish Whiskey Association, representing the greatest growth of any spirits category. Amber said that drinks industry analyst IWSR projects global Irish whiskey sales will grow 33% by 2024, adding that the U.S. is the biggest market, with 43% of all Irish whiskey exports.

On Friday, Coherent Market Insights projected annual global Irish whiskey growth of 8.97% through 2027, attributing this largely to “the growing number of younger people around the world” and “a surge in demand for super-premium and high-end premium whiskey blends.”