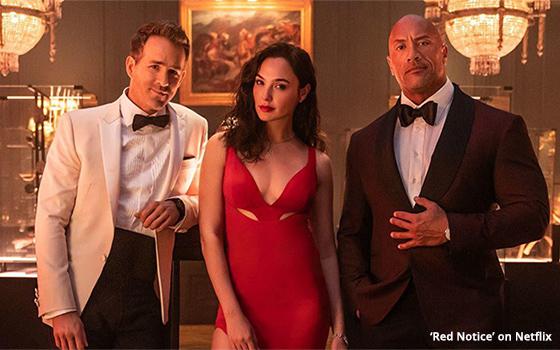 In its second week on Netflix, the original movie  “Red Notice” pulled in a massive 129.1 million hours viewed worldwide. It is now at 277.9 million hours viewed overall -- the second-best English-language movie of all time on the subscription VOD service, according to the company.

For the most recent week, November 15 through 22, “Red Notice” tallied more viewed hours for the week than the next nine English-language movies combined: 126 million hours.

The second-best movie for the week on Netflix was “The Princess Switch 3: Romancing the Star” -- way down in second place at 24.8 million. “Love Hard” now in its third week, pulled in 21.2 million.

“Red Notice's” 277.9 million viewed hours is now the second-best movie of all time on the service for a film in its first 28 days of release. “Bird Box” is still the top Netflix movie, at 282 million in terms of hours viewed.

“Squid Game”  leads all TV and movie content of all time on Netflix, now at a massive 1.65 billion hours viewed. This is more than twice the best English-language TV show “Bridgerton” (Season 1), at 625.5 million hours.