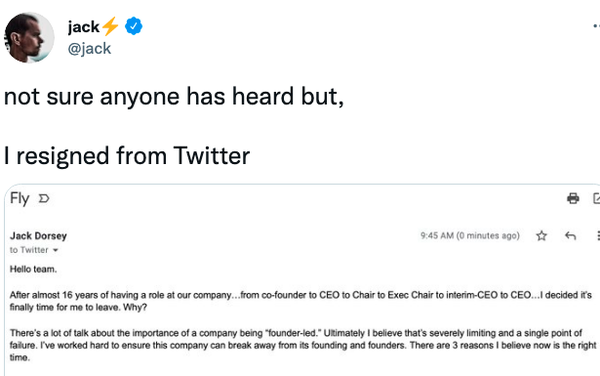 Twitter co-founder Jack Dorsey -- the man the posted the world’s first tweet -- today posted his last one as Twitter CEO. Dorsey announced he is stepping down and will be replaced by CTO Parag Agrawal.

“I've decided to leave Twitter because I believe the company is ready to move on from its founders,” Dorsey said in a statement released by Twitter, adding, “My trust in Parag as Twitter's CEO is deep. His work over the past 10 years has been transformational. I'm deeply grateful for his skill, heart, and soul. It's his time to lead.”

Dorsey will remain on the board of directors until his term ends at the 2022 meeting of stockholders, the company said.

Salesforce President and COO Bret Taylor will become the chairman of the board, succeeding Patrick Pichette, a former Google executive, who will remain on the board as chair of the audit committee.

Over the years, Dorsey’s roles at Twitter have fluctuated. After co-founding Twitter in 2006 and serving as CEO until 2008, he was pushed out of the role. Then, in 2015 -- after CEO Dick Costolo stepped down -- Dorsey returned to lead Twitter.

Last year, Dorsey was almost dismissed after Twitter stakeholder Elliott Management sought to replace him. Paul Singer, Elliott Management founder, voiced his opinion that Dorsey should step down as CEO of one of two public companies, Twitter or Square, his digital payments company.

Twitter’s shares have jumped 85% since Dorsey took over as CEO in 2015. Shares rose 11% after the news broke on CNBC this morning before being briefly suspended.

Agrawal joined Twitter in 2011 and has served as CTO since 2017. He’s been responsible for the company’s technical strategy, leading work to improve development velocity while advancing the state of machine learning, said Twitter.

“I look forward to building on everything we have accomplished under Jack's leadership and I am incredibly energized by the opportunities ahead. By continuing to improve our execution, we will deliver tremendous value for our customers and shareholders as we reshape the future of public conversation,” said Agrawal.