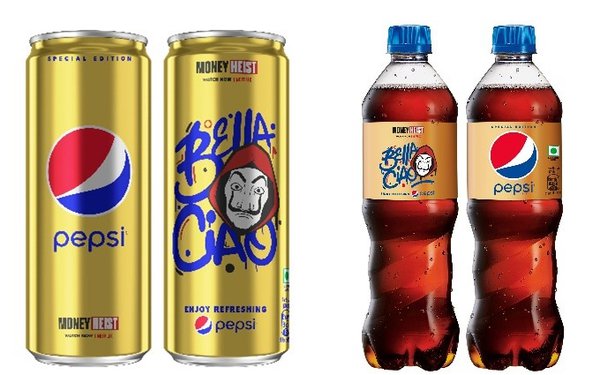 Coming to Brooklyn for three days starting Dec. 9, the streamer has teamed up with events company Fever to launch “Money Heist: The Experience,” a one-hour $55 “first-person immersive heist on an international scale…with costumes, actors and an exciting storyline.”

Those costumes will definitely include “Money Heist’s” popular Salvador Dali-inspired masks and red jumpsuits, worn by the show’s band of Robin Hood-type thieves, which have come to symbolize “La Resistencia."

That Resistance theme -- exemplified by the show’s Professor mastermind character as well as its frequent use of an Italian anti-fascist song "Bella Ciao” -- has in turn been taken up by protesterssporting the masks and jumpsuits across the globe in support of such movements as civil rights, feminism and environmentalism.

It’s also been adopted by Estrella Galicia beer, which like “Money Heist” is a product of Spain, where the series’ original title is “La Casa De Papel.”

The brew, often seen on the crime drama through product placements, has rolled out a special edition with labels that include images of the show’s masks -- and, with the tagline “The story ends. The Movement Endures,"  in  a campaign supporting the release of 85 million bottles of  its “Money Heist” beer in 60 countries.

Just 20,000 of those bottles have made it to the U.S., Estrella Galicia’s international brand manager Gonzalo Brey, told Marketing Daily. They’re being sold in stores, bars and restaurants via Virginia’s Balearic Beverage Distributors – with marketing support including a social media video and point-of-sale materials.

In 20 countries outside the U.S., as reported by Spain’s O.K. Diario, the resistance theme is more explicit, with Estrella Galacia films depicting real-life “resistance” heroes from not only Spain, but also from such countries as Brazil, Uruguay, Portugal and Italy. Pedro Alonso, who plays the show’s Berlin antihero, narrates that campaign.

Netflix has also teamed up with Spotify for a 54-song, three-hour playlist said to include all the music from the series -- and with Unilever’s Magnum Ice Cream for promotions in Singapore and Malaysia. The latter, according to Philippine ad trade pub Adobo Magazine, includes prizes of Dali masks and red jumpsuits in a campaign conceived with Accenture Interactive’s Entropia.

Earlier this fall in India, Pepsi teamed with Netflix on a virtual fan party that received 9.1 million views in 24 hours over YouTube, Twitter and MX Player, reported Everything Experiential. The soft drink also released limited-edition cans & bottles featuring the Dali mask and the words “Bella Ciao.”