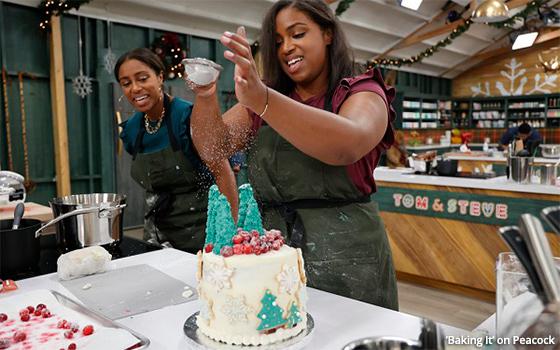 TV’s activist role in enabling America’s addiction to fattening food continues this week with yet another baking competition.

This one is called “Baking It” and it is vaguely related to the Amy Poehler-Nick Offerman crafting competition show called “Making It.”

In addition to their rhyming titles, both are produced by NBCUniversal for the company’s own platforms -- “Making It” for NBC and “Baking It” for the Peacock streaming service, where it starts streaming on Thursday.

Like Amy Poehler in “Making It,” “Baking It” features two former “Saturday Night Live” cast members, Andy Samberg and Maya Rudolph, as co-hosts -- otherwise known as the easiest paydays they ever had.

In a shrewd move that undoubtedly saved the company money, “Baking It” is even made on the same set as “Making It,” but with a few superficial alterations.

This is noted at the very beginning of Episode 1 of “Baking It” as Poehler meets Rudolph and Samberg outside of the “Baking It”/”Making It” cottage and the three engage in a segment of overlong banter that sounds as if someone sleepily scribbled it on a napkin sometime late the previous evening.

Like the dozens of baking contests that have risen steadily in number for years now on TV, “Baking It” features a parade of diverse, enthusiastic, amateur bakers who will try to batter the competition in order to win some dough.

The judges’ panel on this show features four grandmothers who are billed as excellent amateur bakers in their own right.

While the rest of this show is more or less like all the rest, this might be the first time that a panel of judges was composed of grandmothers

Throughout the show, the two co-hosts provide “comedic and musical commentary on the action.”

An example of this -- in which Rudolph and Samberg duetted on a sarcastic song -- took place during the premiere episode’s first segment. This performance had me thinking of another possible title for this show, “Faking It.”

After this song (or perhaps during it), I bailed. And this was only something like three minutes into the show.

Not that I or anyone else should have high expectations for yet another TV baking competition. Clearly there are too many of these anyway.

What is striking is that just a few years ago, the content on the streaming services was easily distinguishable from the kind of programming that had long been the exclusive bread and butter of the old broadcast networks and basic cable channels.

But increasingly, the streaming services are all picking up shows that we have long associated with non-streamers such as baking competitions, florist contests, sitcoms with laugh tracks and many more.

If “Baking It” symbolizes anything, it is that TV’s hallowed streamers are no longer so special. Instead, they are beginning to look just like everything else.

“Baking It” starts streaming on Thursday (December 2) on Peacock.