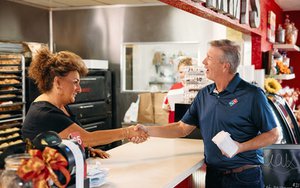 In a novel twist on fast-food's typical Goliath-clobbers-David storyline, Domino's is giving its local competitors a $130,000 hug. A group of Domino's franchisees -- who view themselves as small-business owners, even if they are part of the world's biggest pizza brand -- are handing out gift cards to support local restaurants.

By handing the cards over to randomly chosen delivery customers, Domino’s hopes to boost the fortunes of the thousands of small restaurants staggering under fees from delivery companies like Uber Eats, DoorDash and Grubhub.

The campaign also aims to raise awareness of how delivery fees work. While the battle to cap these fees may be well known to urbanites in places like New York and San Francisco, the issue has gotten less coverage in mainstream America.

"This has been such a hard time for restaurants," says Steve Dolan, who owns five Domino's in the Denver area. (He's pictured here, right, buying $50 gift cards from Vickie Corder, owner of Grammy's Goodies in Wheat Ridge, Colorado.)

"Early on in the pandemic, these third-party delivery services offered restaurants a way to survive," he says. "And that’s a good thing. But as time goes by, small local restaurants are increasingly burdened by these large fees."

Participating Domino's stores and franchisees purchased 2,600 $50 gift cards from small eateries in their communities, including taco stands, barbeque joints and bakeries. They then handed the gift cards out to people who had ordered a Domino's delivery, urging the recipients to order directly so they could help the locals avoid the fees from the delivery apps.

Dolan says the last two years have made many in the business aware of how connected their fates are. "We are all brothers-in-arms. I grew up in this community," he tells QSR Land, "and I know many of the people that own these restaurants.”

The TV spots highlighting the program are running nationally.

And while Dolan doesn't necessarily expect an immediate lift in sales at his stores as a result, "I do think it comes down the karma angle. We think locally every day. This seemed like a good way to do something to help."