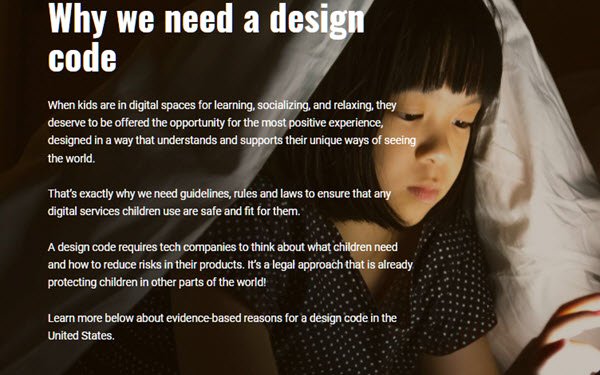 A coalition of children's and safe technology advocacy groups has launched a campaign to institute design codes in the U.S. to protect children from manipulation and other harms online.

The “Designed With Kids in Mind” coalition — whose members include Fairplay (formerly Campaign for a Commercial-Free Childhood), Accountable Tech, American Academy of Pediatrics and Center for Digital Democracy, among others — says it will push for legislation and new Federal Trade Commission rules that protect children and teens “from a business model that puts young people at risk by prioritizing data collection and engagement.”

The initiative -- backed by a grant from Oak Foundation, which funds efforts to address "issues of global, social and environmental concern" -- is modeled after the U.K.’s Age-Appropriate Design Code (AADC), which went into effect earlier this year.

The coalition is promoting three bills: the Children and Teens’ Online Privacy Protection Act (S.1628); the Kids Internet Design and Safety (KIDS) Act (S. 2918); and the Protecting the Information of our Vulnerable Children and Youth (PRIVCY) Act (H.R. 4801).

Together, the bills would expand privacy protections to teens for the first time and incorporate key elements of the AADC, such as requiring the best interests of children to be a primary design consideration for services likely to be accessed by young people.

The legislation would also help protect children and teens from manipulative design features and harmful data processing.
The coalition’s website (shown above) lays out how platform designs and features contribute to common mental and physical health problems in young people.

For example, it says, autoplay features can lead to excessive time on screens, which is “linked to mental health challenges, physical risks like less sleep, and promotes family conflict”; algorithmic recommendations “risk exposure to self-harm, racist content, pornography and mis/disinformation”; location tracking “makes it easier for strangers to track and contact children”; and encouraging sharing “leads to loss of privacy, risks of sexual predation and identity theft.”

“We need an internet that helps children learn, connect, and play without exploiting their developmental vulnerabilities; respects their need for privacy and safety; helps young children disconnect at the appropriate time rather than manipulating them into spending even more time online; and prioritizes surfacing high-quality content instead of maximizing engagement,” says Fairplay Executive Director Josh Golin. “The U.K.’s Age-Appropriate Design Code took an important step toward creating that internet, and children and teens in the U.S. deserve the same protections and opportunities. It’s time for Congress and regulators to insist that children come before Big Tech’s profits.”