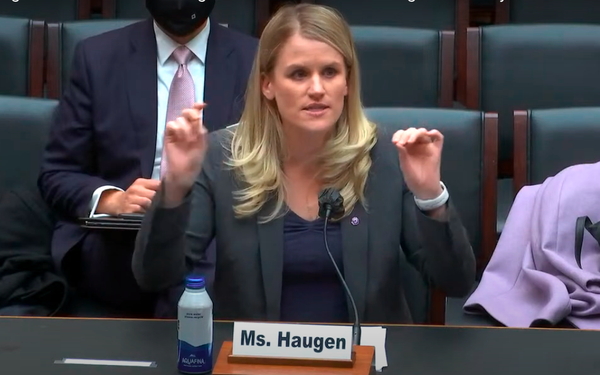 Facebook whistleblower Francis Haugen Wednesday testified to the House Energy & Commerce Committee about four new measures proposed to alter Section 230 of the Communications Decency Act. She urged Congress to act swiftly, but also to use caution in overhauling any laws.

The 1996 law shields online platforms from liability for their users’ actions. Reforms have stalled as Republicans and Democrats continue to battle over what kind of content should be regulated and seen as harmful.

However, some house Democrats are hopeful to make change happen. In an interview with The Washington Post, Rep. Mike Doyle (D-PA) said that the fact Congress hasn’t acted to reform the law after so much discussion is “not acceptable.” Doyle said his goal at the hearing was to “start moving legislation forward.”

Doyle also acknowledged the importance of Section 230, but said the courts’ interpretation of the rule should change. “Section 230 is critically important to promoting a vibrant and free internet,” he said. “But I agree with those who suggest the courts have allowed it to stray too far.”

Doyle noted the 4 bills that members of the committee have proposed to make changes to Section 230, including New Jersey Rep. Tom Malinowski’s “Protecting Americans from Dangerous Algorithms Act,” which would limit protections for companies deploying algorithms that boost harmful content.

“There’s a growing realization that the algorithms are the problem,” said Malinowski in a Wednesday interview with The Verge. “Through their recommendation algorithms, the social media companies have created a perfect machine for driving people to political extremes and even to violence.”

Earlier this month, MediaPost reported on the harmful and predatory effects of algorithmic racism, a less talked about consequence of unregulated social media giants.

Republican members of the committee focused on censorship more than algorithmic reform, specifically sharing a communal belief that Facebook and other social media platforms are biased against their political party. Haugen argued that a user’s political beliefs don’t matter when Facebook has the ability to make their platform safer regardless.

There were two reforms laid out by Democrats that didn’t solely focus on algorithms. One was the Safe Tech Act, which would remove Section 230 protections for ads and other paid content. This reform specifically was met with criticism when it was originally proposed this past February, mostly due to the fact that the majority of harmful social media content is organic and spread by users, not advertisers. The other reform was the Civil Rights Modernization Act, which focuses on targeted ads that violate civil rights laws.

Haugen urged Congress to act swiftly in regulating Facebook, while also advising Congress to act with caution when considering reforms. This is mainly due to the last major change made to Section 230: the Fight Online Sex Trafficking Act, otherwise known as SESTA/FOSTA, which harmed sex workers.

But while Haugen supports reforming the law, others believe Congress is moving too fast and will continue to put certain lives in danger.

“The last time Congress tinkered with Section 230, they kicked sex workers to the curb and disincentivized platforms from rooting out child abuse,” said Adam Kovacevich, CEO of progressive advocacy organization Chamber of Progress. “Section 230 isn’t a weapon for punishing Facebook, it’s a law that makes the Internet safer and healthier for everyone. Congress should study the impact of their last 230 change before making any new changes.”

Haugen encouraged Congress to talk with human rights advocates about SESTA/FOSTA’s negative impacts on the safety of more vulnerable groups in society. “They should consult with the international human rights community who have seen first hand how authoritarian governments around the world can weaponize reductions in intermediary liability to silence dissent,” she said.

Chamber of Progress cited a letter that was signed by more than 70 human rights, civil liberties, and LGBTQ+ organizations warning lawmakers about the enormous harm to marginalized communities that could result from careless changes to Section 230.

“It’s irresponsible and unconscionable for lawmakers to rush toward further changes to Section 230 while actively ignoring human rights experts and the communities that were most impacted by the last major change to Section 230,” said Evan Greer, director of the nonprofit advocacy group Fight for the Future. “The last misguided legislation that changed Section 230 got people killed. Congress needs to do its due diligence and legislate responsibly. Lives are at stake.”

A second hearing will likely take place next week as the committee attempts to pass these meaningful reforms.