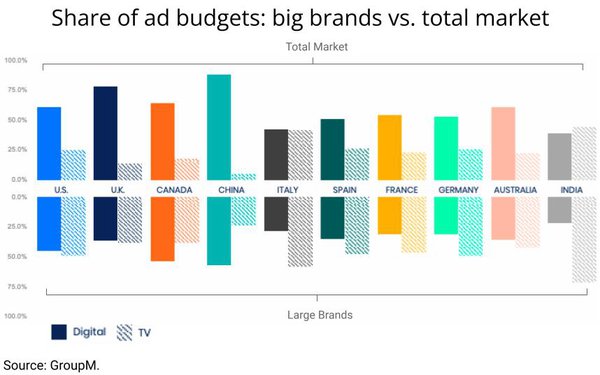 One of the most telling analyses to come out of the Big 3 year-end 2021 advertising forecasts was this chart (see above) pushed by GroupM to illustrate its analysis of the share of ad budgets going into digital media vs. TV for big advertisers vs. the overall advertising market.

The analysis, which varies somewhat by country, shows an overall consistent pattern that the world's largest brands still budget significantly higher percentages of their ad spending in TV than the overall advertising marketplace. And with the exception of China, TV still is the largest share of ad spending vs. digital among the biggest brands.

"The entire U.S. advertising market," he continued, "is 64% digital and about 25% television."

Wieser noted that similar patterns exist "in every country on earth" because "the typical large brand is big enough to make use of television.

He also noted during the presentation that GroupM analyzes the total advertising market for each country based on media company ad revenues, which in many cases reflect smaller advertisers, as well as newer "digital endemic" and direct-to-consumer ones that may be allocating most of their budgets to digital.

Speaking about the disproportionate share of big brand ad budgets still going into television, Wieser quipped, "That doesn't mean for a second that they should be in television."

He noted that looking back over time there has been a clear "incremental shift" of their budgets into digital, but that it mostly has come out of other analogue media -- especially print and out-of-home -- "but it's a very incremental shift."

Wieser did not predict how long TV would maintain its hold on big brand advertising budgets, but he noted the medium will be challenged in its ability to "achieve reach and frequency goals" as more of consumer viewing shifts to big streaming platforms worldwide.