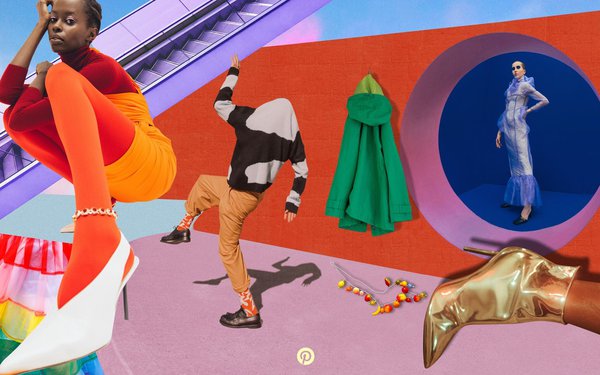 
Heading into December’s darkest days, who doesn’t love to look forward to brighter times -- especially when the forecast calls for fuchsia, tangerine and electric blue?

Pinterest, Etsy and Pantone all released trend reports hinting at a more colorful year ahead.

Pinterest is bracing us for something called dopamine dressing, with the promise that dressing loud will be the new dressing down. “People are heading somewhere over the rainbow this year,” the report says, adding that fashion for all genders and ages will be about “feel-good fits with an electric kick.”

Pinterest says searches for fuchsia outfits have more than doubled, while the number of searchers looking for an electric blue ensemble grew by 140%. There are also more searches for rainbow and gradient (a “gradual blending from one color to another,” according to one definition) dresses.

Conversely, there’s also a resurgence of good old Goth, with searches for blacker-than-black baby clothes up 120%, and Goth business casual up 90%.

And after so many months of party deprivation, Pinterest also predicts an explosion of “altbashes,” with searches for divorced theme parties rising 55%, interest in break-up cakes doubling, and a 40% jump in people looking for photoshoot ideas to celebrate their newly empty nest.

Etsy, too, says it is seeing a surge in interest in greener living, with a 28% increase in searches for environmentally or eco-friendly items.

And if 2022 is anything like this year, employers can expect the resumes of all those “Great Resigners” to look more interesting as they wade back into work life.

In January of last year, Etsy saw an astonishing 1006% increase in searches for “modern resume template” as people moved to refresh their job-hunting skills and find new challenges.

Pantone says that sense of possibility colors its 2022 prediction, too. The company chose Veri Peri as its color of the year, and says the soft blue with violet-red undertones represents “the altered landscape of possibilities, opening us up to a new vision as we rewrite our lives.”

In its announcement, it says the blue hue reflects the universe of digital design. “Very Peri places the future ahead in a new light.”