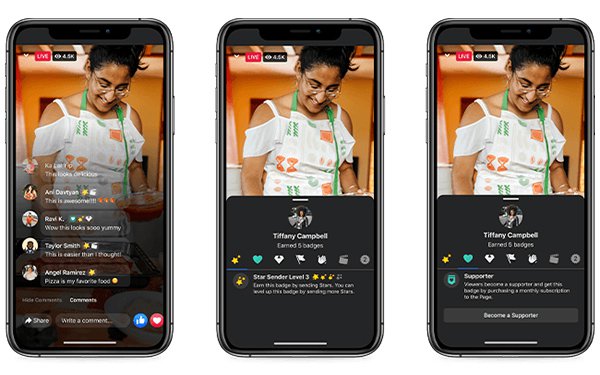 Since its release in August of 2015, people have made over 10 billion broadcasts via Facebook Live, according to Meta’s statement, which today announces a plethora of new tools, many of which surround live streaming.

Facebook said it has simplified the navigation menu, making the insights and tools more accessible to creators as they attempt to reach as many of their fans as possible. The updates are timely as the holiday season approaches.

The update likely to have the greatest impact is “Featured Links,” which allows live streamers to add third-party links to their live broadcasts. For the first time, viewers are able to click directly on links related to blogs, products, and causes –– anything they feel passionate about –– without leaving the live video.

This could play a significant role in the rise of livestream shopping, which TikTok has been pushing for the past year -- partnering with Walmart in 2020 and just yesterday, announcing “OnTrend,” its livestream in-platform shopping event which also includes live entertainment from popular TikTok creators, entertainers and musicians.

Facebook is also testing “Polls” on mobile for the first time, which aims to bridge any gap between creators and fans with real-time feedback between them.

Another update, “Live With,” expands the amount of people that creators can co-broadcast with.

Creators will be able to go live with three guests –– another move toward garnering community among platform users.

Livestream notifications will also be popping up in Facebook Stories in order to help improve stream discovery. Facebook is introducing new badges, and a “Front Row” experience to help streamers highlight their top supporters.

Conversation engagement also seems to be a major focus in these Facebook updates, as creators are now able to react and respond to comments directly from a notification. “These features include comments and replies from creators to the top of the discussion thread on a post and decreasing the visibility of spammy or repetitive comments,” said Meta.

In tow with this trend is a new post option––“Spotlight Conversations”––will include two separate comment sections, one for creators and their guests, and another for others to follow along and discuss.

Lastly, the social media giant has a bonus program beginning “in the coming weeks” for Facebook Live creators, which aims to pay them based on how well their live broadcasts perform.

This program -- at least for now -- is invite only, which may have implications on the continued exclusivity of influencer marketing, a sentiment backed by MSL’s most recent report on the massive racial pay gap in the industry.

According to internal reports leaked in the Facebook Papers and other data, it’s no surprise that Facebook has been steadily losing the interest of younger audiences, who are flocking elsewhere for their social media fix.

These updates, with their focus on boosting popular creators, can be seen as a way to compete with TikTok and win back those younger users.