Why 'Trust,' Not 'Diversity,' Is The Real Marketing Word-of-the-Year 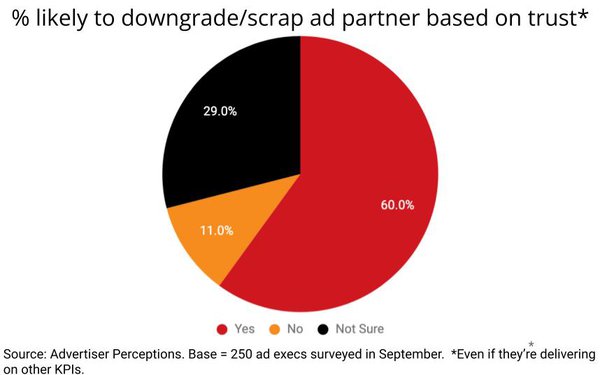 With all due respect to the Association of National Advertisers, "trust," not "diversity," is the real marketing word of-the-year. At least that's my conclusion after Advertiser Perceptions shared its latest research on the topic.

The research, which was based on a survey of ad execs -- both marketers and agency media-buyers -- found that nearly two-thirds would likely "downgrade" or scrap a media outlet from their ad plans altogether based on some kind of trust violation.

While trust always has been a paramount issue in an industry where advertisers and agencies routinely require various proofs of performance on whether their ad buys ran as promised -- pre- and post-digital -- the percentage that asserting they would dump or downgrade media for violating it went up 18 percentage points over the past 18 months. That's a trust point per month, and coincides with another sentiment that ostensibly grew during the pandemic: empathy.

"Two-plus years ago, we were finding things more in the 'talk, but less action' category," says Sarah Bolton, executive vice president-business intelligence at Advertiser Perceptions, who oversaw and analyzed the study's findings, adding: "But post the pandemic, the social justice movement, the trend lines are all moving toward more accountability. And more willingness to act, and less tolerance for these kinds of trust lapses."

Even more significantly, Bolton told me it's not just the overall increase in media partner trust that has been rising, but the types of trust issues associated with them.

"In the beginning, we were seeing it associated with things ethics of data-handling -- you know, whether that's data privacy or security: brand safety, ad fraud, trying to understand where these things stack up with performance and ROI and scale. But in the last 18 months, we've really zoomed in on brand safety and digital content safety. It's a much broader conversation about brand suitability. And it's not just about tech being in control of the adjacency of my ad unit, but taking a step back and looking at the URL-level: 'What are my ad dollars propping up, and where [should] I choose to invest?'"

By URL, Bolton is referring to "uniform resource locator," which is the tech term for a website or destination on the internet. More broadly, though, she is talking about the overall media platform advertisers want -- or more importantly, do not want -- to be associated with.

She says the subplot here is that brand marketers and agency media buyers are becoming much more cognizant of, and guarded about, the idea that their ad budgets are financially supporting media outlets that cause direct or indirect harm to society.

"That reckoning, at a broader level, is happening," she confirmed during our conversation.

Needless to say, as a top Ad Perceptions researcher, Bolton was reluctant to name names, but if I were going to read her mind, I'd say certain social media platforms that help spread and promote harmful content, as well as certain TV news networks, would probably be part of that reckoning.

And I can only imagine that Chris Wallace might have been reading her mind as well, when he announced Sunday that he was resigning as anchor of "Fox News Sunday" -- as well as being one of the more credible journalistic faces of Fox News Channel -- after more than 18 years at the network, to go to CNN's news streaming service, CNN+.

“Fox executives routinely pointed to Chris Wallace in defending themselves from criticism that the network is a dangerous propaganda channel. Wallace gave Fox News a thin veneer of respectability; and now, the veneer is gone," Angelo Carusone, president of watchdog Media Matters for America, said in a statement on Sunday, adding: “Wallace’s unceremonious departure puts to rest any lingering notion that the network has a ‘straight news’ side. Fox executives made it clear that this is Tucker Carlson’s network now. Advertisers, shareholders, and cable news viewers beware: Your money and your investment will continue to fuel Fox’s dangerous lies."

A bipartisan committee of Republican and Democratic senators -- everyone from Ted Cruz to Richard Blumenthal -- could also have been reading Bolton's mind late last week when they unanimously decried the tepid actions of Meta's Instagram to thwart its harmful effects on America's use, and called its CEO's claims that it was adopting sufficient safeguards too little/too late, and that legislation is no longer a question of if, but precisely how and when. But probably pretty soon.

I'm sitting on some other powerful findings from this study, which I'll report on in the next few days. But I just wanted to get out there that while "diversity" might be the feel-good go-to  -- "we're being proactive about an important cultural and industry issue" was the response to the ANA's annual word-of-the-year member survey -- the actual word the association's members missed the beat on is "trust." 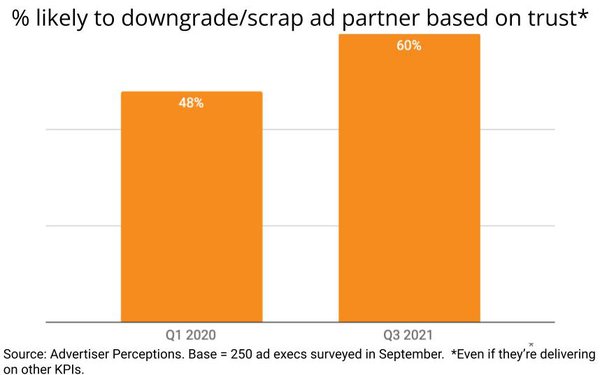