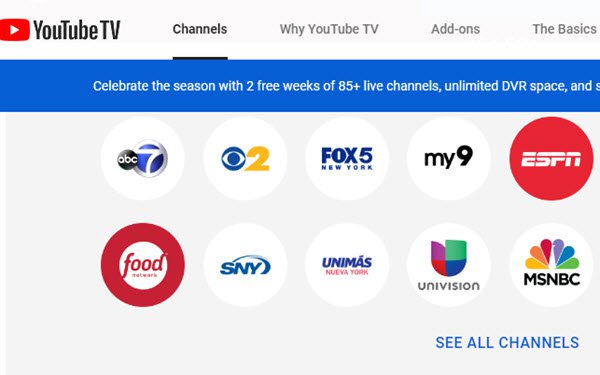 Fresh off a just-resolved carriage feud with Roku, Google’s YouTube TV is now facing off with Disney as their contract ticks down to expiration on Dec. 17.

But this time, rather than YouTube TV facing being dropped by a carrier platform, it’s telling users that it’s prepared to drop Disney-owned channels — and reduce their monthly fee by $15 — if the companies can’t reach a deal by the expiration date.

That would mean losing ABC stations, as well as the Disney and National Geographic channels, ESPN and FX networks, and Freeform.

“Disney is an important partner for us. We are in active conversations with them and are working hard to keep their content on YouTube TV,” YouTube TV stated in an email sent to users on Monday. “Our ask of Disney, as with all of our partners, is to treat YouTube TV like any other TV provider — by offering us the same rates that services of a similar size pay, across Disney’s channels for as long as we carry them.

“We welcome a renewed agreement provided we can reach equitable terms with Disney. However, if we are unable to reach a deal by Friday, the Disney-owned channels will no longer be available on YouTube TV starting December 17, and we will decrease our monthly price by $15, from $64.99 to $49.99 (while Disney content remains off of our platform).”

YouTube TV also noted that while it wants users to stay, it provides the flexibility to pause or cancel service at any time —and pointed out that users can consider signing up directly through Disney for the Disney Bundle, at $13.99 per month.

In this case, however, the stakes include the possibility that some users of the YouTube TV virtual multichannel video programming distributor (vMVPD) platform might choose another option: Switching to Hulu Plus Live TV vMVPD. Disney controls and owns most of Hulu now, and Comcast can require Disney to buy the remainder of the company, at a fair market value, as early as 2024.

“Disney Media and Entertainment Distribution has a highly successful track record of negotiating such agreements with providers of all types and sizes across the country and is committed to working with Google to reach a fair, market-based agreement,” Disney said in a statement. “We are optimistic that we can reach a deal and continue to provide their YouTube TV customers with our live sporting events and news coverage plus kids, family and general entertainment programming.”

A similar scenario played out in September, when YouTube TV told users it would reduce their monthly fee by $10 if NBCUniversal content was dropped due to failed carriage renewal negotiations — and noted that users could consider signup up for Peacock through NBCU. The companies reached an agreement that averted a blackout.

Fees have become a focal point in another ongoing carriage feud, between MSG regional sports networks (RSNs) and Comcast.

Comcast reduced its monthly fee by $3 for affected Xfinity subscribers in Connecticut and New Jersey.

MSG, alluding to Comcast’s previous $10.75 per month RSN fee in those markets, claims Comcast should be reducing its fee by $10 per month—and is urging users in those states to complain to their state attorneys general about the supposedly too-low fee reduction.

However, Comcast points out that the $10.75 fee also included RSNs that users are still receiving, including SNY, the YES Network and, in some areas, NBCSN Philly.