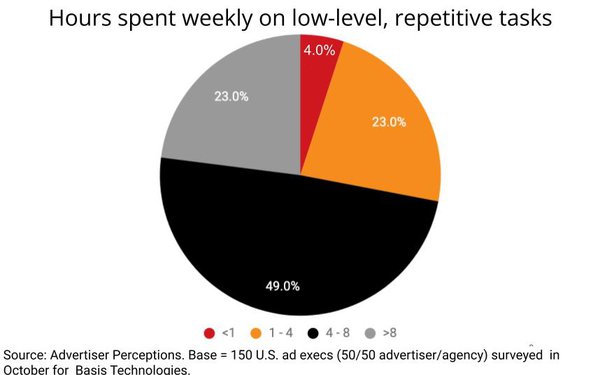 The average industry executive spends six hours weekly -- about 15% of a typical work week -- performing "low-level," repetitive tasks such as cleaning data, merging sources of data, or manually entering data necessary to fulfill their jobs, according to findings of a survey conducted by Advertiser Perceptions in October for Basis Technologies (formerly Centro).

The study, which also showed many industry executives are burning out and are prone to leave their jobs in the near future as part of the "Great Resignation" (see related story today), indicates that nearly three-quarters spend eight hours or more weekly performing such tasks, and that much of it involves working with a multitude of so-called "single point" solutions that don't always work well and integrate together.

The study also found that the average executive -- both advertisers and agencies -- uses nine software platforms to execute a typical campaign.