It wouldn’t be holiday season without brands jumping into ugly sweaters. This year’s D2C gimmicks run the gamut from "holey-holiday” sweaters that show a wearer’s tattoos to designs featuring light-up snow globes and gum dispensers.

E. & J. Gallo’s Familia Camarena Tequila partnered with the Ugly Sweater Company for a $125 polyester Tequila Tuxedo, which comes in a branded blue-and-white winter design, with an inside pocket that will hold an included branded flask. 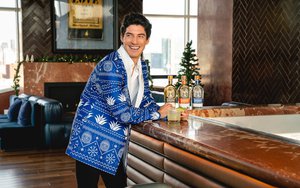 Ugly Sweater Company, which specializes in branded garments, has previously worked with such brands as Pillsbury, Popeyes, Red Lobster, Sunny Delight and many more.

William Grant & Sons’ Sailor Jerry’s Spiced Rum has produced only 20 of its “hole-y holiday” sweaters, which feature customized holes to show off each wearer’s own tattoos. Those holes and respective tattoos, incidentally, can only be on one’s arms, neck, side, back, upper chest, stomach, and/or wrists.

The 20 sweaters, valued at $50 each, are going to the winners of a contest in which consumers were invited to post or DM images of their tattoos via Instagram. 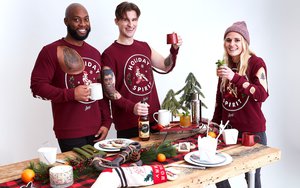 B&G Foods’ Green Giant ran a sweepstakes to give away ugly sweaters this year, but with a twist: the campaign was geared to Thanksgiving rather than Christmas.

“The ugly sweater and branded merch space was crowded for consumer food brands this season,” a Green Giant spokesperson told Marketing Daily, but the Thanksgiving angle, combined with a charitable donation per users’ social media posts, helped result in 65,000 entries. Green Giant gave $25,000 to No Kid Hungry, along with rewarding 500 sweeps winners with casserole-themed sweaters in three designs. 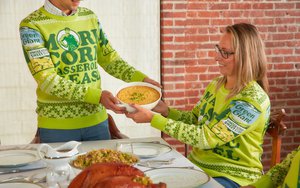 Mars Wrigley’s Orbit Gum’s also ran a November sweepstakes to give away its ‘Smooching Sweater”: a peppermint-scented garment complete with
overhanging mistletoe, multicolored string lights and a gum dispenser. 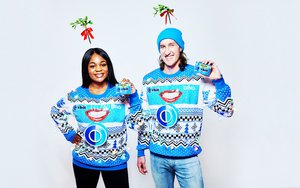 Outback Steakhouse, in partnership with apparel company Shinesty and Bravo’s “Southern Charms” stars Craig Conover and Austen Kroll, are pushing ugly pajamas, which cost from $29.99 to $49.99. Anyone who wears the PJs to Outback on Jan. 10 will receive a free order of the chain’s Bloomin’ Onion dish.

White Castle's $45.99 “Slider Season” sweater features the chain’s logo inside a light-up snow globe that wearer can adjust via a button within the seams.