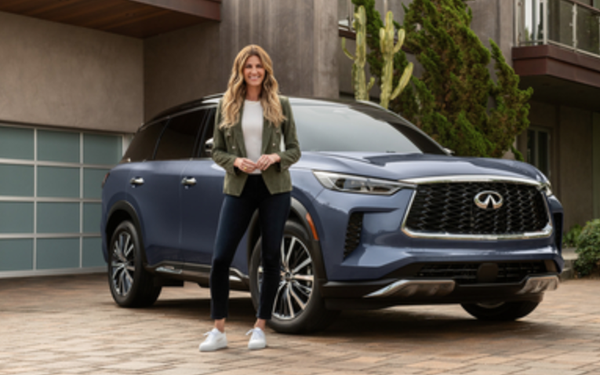 The Fox Sports veteran reporter “reports” on the 2022 Infiniti QX60 as part of the automaker’s “Unscripted” series of creative.

The spot debuted Dec. 18 and is scheduled to run Dec. 23 and Dec. 25 during NFL games as well as online. The automaker tweeted the commercial last week.

In July, Infiniti announced a reservation program featuring Cameo, to connect fans with pop culture icons, for the SUV. Infiniti was the first automaker to use Cameo to provide consumers with an enhanced shopping experience complete with personalized discovery and FAQ.

During a program for prospective owners to register interest in the all-new SUV this summer, Andrews — along with such celebrities as TV personality Clinton Kelly, Olympic gymnast Gabby Douglas and actor Dulé Hill  — answered questions about the all-new Infiniti QX60 submitted by shoppers via Cameo.

Now, Andrews is offering her thoughts about the new SUV in the commercial.

Internal research leading up to the debut of the all-new, three-row SUV revealed more than 70% of prospective QX60 buyers felt automakers didn’t listen to them. What’s more, 90% of those buyers hold leadership positions at work and are more than four times as likely to be involved in philanthropy.

Andrews is all the above — and more — making her an ideal and relatable partner to share her viewpoints about the all-new SUV directly with prospective buyers, says Michael Cope, senior manager, marketing communication at Infiniti USA.

“Erin Andrews closely aligns with the Infiniti brand, as she is daring, approachable, successful, and empowering,” Cope tells Marketing Daily. “In a male-dominated industry, she truly sets the tone and is paving the way for more female voices to be heard.”

The automaker selected Andrews due to her a strong following with both men and women, matching the target audience for the QX60, he adds.

Partnering with ambassadors like Andrews enables the brand to reach audiences that typically wouldn’t follow the automotive industry as closely as other audiences.

“This in turn allows Infiniti to reach a new demographic of consumers, and helps them see content on their feed, online, etc. from influencers that they know and love,” Cope says.

It also “helps to define a personality for the brand and the vehicle while extending consumers an invitation to live in style, presented by those who embody Infiniti’s values,” he adds.