Psst! Have You Heard? 'Gossip Girl' Was Year's Worst Show 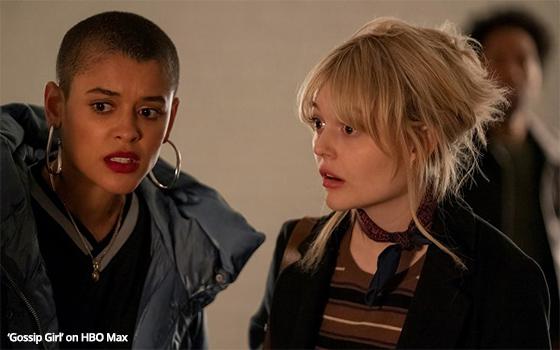 The worst-reviewed show here in the TV Blog in 2021 was "Gossip Girl," although there were a few close seconds.

"The makers of the new 'Gossip Girl' [the rebooted series that premiered in July on HBO Max] … have made a show that is worse than the original," said our review.

"[It is a show that] “insults every group that its characters represent -- the rich, the not-so-rich, blacks, whites, Asians, all high-school teens, all teachers, the intelligence of all who will watch it, and the list goes on and on," the review said.

I could also go on and on, but the point is made. And once again, let it be said that the ravings of a lone TV critic have no impact on the success or failure of TV shows. "Gossip Girl" will be back for a second season.

Although I cannot seem to forget “Gossip Girl” (although I wish I could), a number of other shows reviewed here were literally forgettable in the sense that I do not remember them at all.

That’s the nature of the beast these days, isn’t it? So many TV shows today arrive and disappear so quickly that they barely make an impression.

Remember "Call Your Mother" or "The Mayor"? I didn’t until I came across the reviews I wrote about each of them last January.

“Call Your Mother” starred Kyra Sedgwick as a neurotic mom who moved all the way to California to be near her adult children simply because they didn’t call her enough. Our review called the show "excruciating."

“The Mayor” starred Ted Danson as the mayor of Los Angeles. Our review described this scenario as “unbelievable” and declared the show a dud, which it was.

Another sitcom earning its way into this “Worst Of” column was “Dad Stop Embarrassing Me!” on Netflix. The person who should really be embarrassed by this show is Oscar-winner Jamie Foxx, who starred in it.

The year’s most bizarre comedy was the one called “Chad” on TBS, in which an adult woman -- middle-aged Nasim Pedrad, then 39 -- played a 14-year-old boy named Chad.

“This scenario is so distracting,” said our review, “that it presents an insurmountable obstacle to accepting this show’s premise, much less enjoying it.”

But at least these were only half-hour sitcoms, which meant they were easier to sit through than some of our one-hour dramas this past year.

Among the dramas that came in for thumbs-down reviews here in 2021 were ABC’s “Rebel,” in which Katey Sagal played a shrill activist nicknamed Rebel who seemed to shriek through the entire show; and “Mayor of Kingstown” on Paramount+ -- described in our review as “the most depressing TV show of the year.”

Other shows made our “Worst of 2021” year-end list based on some specific characteristics. For example, two shows made the list based solely on the pungency of their titles -- the AMC comedy called “Kevin Can F**K Himself” and “When Nature Calls With Helen Mirren” on ABC.

Two other shows reviewed negatively here in 2021 continued TV’s apparent campaign to persuade Americans to partake of unhealthy foods regardless of health or dietary considerations.

One was “Fresh, Fried & Crispy” on Netflix, a food show in which a man named Daym Drops traveled around the U.S. recommending an array of artery-clogging foods that had all been fried in oil or butter and sometimes both at the same time.

The other one was Cooking Channel’s “Cheat Day USA,” which who encouraged viewers to, basically, cheat on their diets. It should go without saying, but this was the wrong message to send to a nation in the grip of an obesity epidemic.

Other shows panned by the TV Blog this year came mainly from the world of unscripted TV, including ABC’s “Celebrity Dating Game,” which came very close to elbowing “Gossip Girl” out of the top spot in this blog; and NBC’s “Home Sweet Home” in which families of different backgrounds swapped houses for a few days.

Come to think of it, Paris Hilton’s Peacock show “Paris in Love” was right up there with “Celebrity Dating Game.”

" 'Paris In Love’ is one of those shows that really makes a TV columnist earn his pay,” I wrote when the show premiered last month.

Another show for which I should have earned a year-end bonus was ABC’s “Pooch Perfect,” a dog makeover show that had dog owners and groomers costuming dogs in such a grotesque manner that it amounted to animal abuse.

The year’s worst TV shows are only part of the content picture for 2021. For a much more upbeat assessment of the year’s TV shows, please tune in tomorrow for our annual roundup of the year’s best.