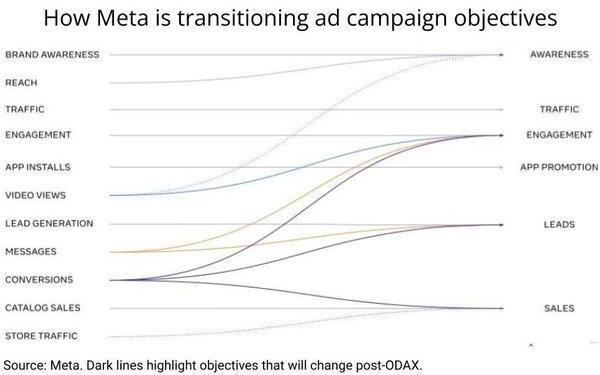 Meta has announced a slew of major changes to its advertising objective selection experience in Ad Manager, leading to a system it is calling Outcome-Driven Ad Experiences (ODAX).

The main goal is to simplify and streamline the existing interface by making it outcome-based, consolidating objectives and focusing on the most basic options and tools.

The advertising ecosystem, according to Meta, has become fragmented and overly complex.

Specifically, advertisers have complained about not understanding which objectives will help them achieve their desired outcome while setting up a campaign.

With ODAX, advertisers will thus be able to select their business outcomes from a list of six objectives –– Awareness, Traffic, Engagement, Leads, App Promotion, and Sales –– pared down from the original eleven. The interface will then guide them to the most optimal campaign creation paths to achieve what they want.

Meta says these changes will have the greatest impact on advertisers who predominantly use Conversions, Messages, and Video Views campaigns, and will likely be rolled out through the next year.

While no substantial knowledge of when these changes may take place, it seems that Facebook and Instagram ads will likely be impacted sometime in the near future. Until then, it is uncertain how helpful or limiting the updates will be.