The Man Who Pioneered The 24-Hour Broadcast Day

If you ever get up in the middle of the night and flip through channels on TV to pass the time, you’ve had the option of watching hundreds of shows, movies or infomercials that were available in the wee hours or on-demand. And you have Tom Snyder to thank for that.

Prior to 1973, when Snyder debuted as host of "The Tomorrow Show" on NBC, the broadcast network TV day ended the network's "The Tonight Show," then hosted by Johnny Carson, went of the air, followed by a recording of the National Anthem and ultimately, a TV test pattern until the broadcast day resumed the next morning.

Snyder, who's last original episode of "Tomorrow" aired 40 years ago (Dec. 17, 1981), was a TV pioneer in many other ways, introducing American insomniacs and/or late night dwellers to long-form interviews with compelling people people.

“If you define a broadcaster as someone who informs and entertains, and can do a thorough interview with anyone, you can make the case that Snyder was truly the last broadcaster,” said David Bianculli, television critic for National Public Radio’s "Fresh Air with Terry Gross."

“Today’s television interviewers and newscasters can report the news, but they don’t have the versatility to handle any and all types of interviews," Bianculli recalls. "Snyder had a special ability to break through the TV screen and grab your attention.  People stayed up late just to watch him.  Remember, DVRing or TiVO or VCRs weren’t options at that time.  Snyder was the last of the really great television interviewers and combined that with a great broadcaster’s sensibility that a limited few - David Letterman, Regis Philbin and Stephen Colbert - could connect with the audience and laugh at themselves.”

Snyder made headlines with "Tomorrow" interviews featuring controversial figures like Charles Manson, the Ramones, John Lydon of the Sex Pistols, the rock band KISS (in full make-up) and a frank discussion (for the 1970s) with Elton John about his sexuality.  Wendy O. Williams of the punk band The Plasmatics exploded a television on set during one appearance, and demolished an automobile during another.

Snyder conducted the last television interview with John Lennon in April 1975 prior to Lennon’s murder in 1980.  Later that year, he introduced the first cast of NBC’s next foray into late night television -- "Saturday Night Live" -- and was ultimately parodied in classic SNL skits by Dan Aykroyd, who performed a dead-on Snyder impersonation, complete with his smoking on-camera and overpowering, rat-a-tat laugh.

Mixed in along the way were conversations with people that piqued Snyder’s personal interests, ranging from George Fennerman, the 1950s announcer sidekick to Groucho Marx on “You Bet Your Life,” to Disney animator Ward Kimball, who chatted with Snyder about their mutual love of toy train sets.   Snyder’s opening monologues were also captivating highlights of his shows, where Snyder shared his personal stories of daily living, from house problems to traffic to trying to get plastic wrap out of the box.

“He would turn the mundane into the personal,” recalls Michael Naidus, who served as publicist for "The Late Late Show" on CBS-TV when Snyder hosted that program starting in 1995.

"I know that’s a phrase that’s casually thrown around, but Tom was the center of attention in any room or TV screen he occupied. He was the greatest TV interviewer. From the first time I saw him on the Tomorrow show, while I was up late doing my college homework, he held me spellbound.”

Horowicz, who served as Snyder’s producer at WABC-TV news in New York and for the shows on CNBC and CBS, recalls, "Tom was great because he knew his audience well. He said the late-night audience at that time was made up of ‘the jokers and the smokers, the drinkers and the thinkers.’  He respected the diverse range of his audience and their appreciation of the conversations that made up his shows.”

Naidus remembered Snyder describing people watching his show “‘laying in bed, with the TV visible between their feet.’  There was a particular intimacy with the late, late night hour audience that Tom sensed wanted a show that was totally different from the one they watched at 11:30 p.m.  Tom had the ability to listen - which you don’t see in most of today’s interviewers - and he made the camera disappear, removing any barrier between him and the viewers.”

Snyder’s conversations with guests took unexpected turns based on his curiosity and the flow of the conversations, notes Horowicz.  An interview with "Friends" star Courtney Cox evolved into a conversation about their mutual home renovation challenges.  Snyder’s favorite guests, according to Horowicz, included comedians Tim Conway, Jeff Foxworthy, Bob Newhart, Rosie O’Donnell, and director Barry Sonnenfeld. “They always left Tom and the crew in stitches," he recalls.

An interview with actor Burt Reynolds made headlines because of Reynolds’ revelation that Dinah Shore was the love of his well-storied romantic life, and that he regretted not marrying her.  Snyder’s interviews with socialite Gloria Vanderbilt about her son’s suicide and a series of chats with actor Robert Blake were an intimate look at the conflicts in his life shortly before Blake was charged with murdering his second wife.

A young Quentin Tarantino talked about film history “in a way that's impossible on television talk shows now made,” Naidus recalls, adding,  “At the time of Tom's CBS show, "Friends "was all the rage.  You could see early on how bright and versatile Lisa Kudrow was and is.”

Bill Maher, who taped his ABC show "Politically Incorrect" across the hall from the "Late Late Show," was a great last-minute guest in the event of a no-show.

Conversations with Larry Flynt and Hugh Hefner’s conversations were more often about the First Amendment than about pornography, according to Naidus, who cited the show’s “low-tech, so personal” ambience as a key to Snyder’s success.

“They showed photos of Tom's barbecues and short clips of the assistant director's appearance on a game show, or the teleprompter operator's walk on the field at a Super Bowl.  Tom talked about his mom -- ‘Mother Snyder’ -- with so much love.  The smallest things in his life became fodder for a national conversation.  Unlike most talk shows at that time or since, this show was personal, totally personal.”  That personal feeling extended to viewers calling to the CNBC and CBS shows.  Those callers were a big part of the show,” Naidus says. “They lit Tom up as much as the celebrities.  For many moons, we heard regularly from ‘Debi from Ottawa,’ an adoring fan.  When we stopped hearing from her, we all noticed and feared the worst.”

Dorian Hannaway, who worked with Snyder at CBS in her role as the network’s director of late night programming, recalls that, “When David Letterman moved his weeknight show to CBS and was looking for a show to follow him, Letterman was an avid 'Tomorrow' show fan and regarded Snyder as the only choice to the show following his on CBS.

“Tom had the gravitas to combine news and entertainment on his show, and was able to take on hard news coverage like the Oklahoma City bombing and O.J Simpson trial, as well as interview entertainment guests and people that interested him.”  Snyder was known to speak his mind on and off the air, remembers Hannaway.  “When CBS executives agonized over what the set of 'The Late Late Show' would look like, Tom got fed up and told them off: 'Nobody ever left a Broadway show humming the set!’”

After Snyder’s late night run on CBS ended, he moved to San Francisco, faded from the public eye, and passed away from leukemia in 2007 at the age of 71.

Sadly, all that remains of a one-stop online homage to Snyder is an out-of-date fan website.  Very few of his shows are available online, save for some that can be watched on YouTube.  Like the current television broadcast schedule, the YouTube clips are available 24-hours a day. Here's one below featuring the last interview with John Lennon before he died. 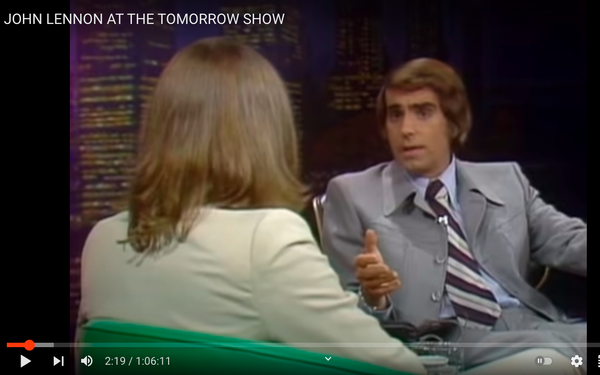 2 comments about "The Man Who Pioneered The 24-Hour Broadcast Day".
Check to receive email when comments are posted.
Read more comments >
Next story loading