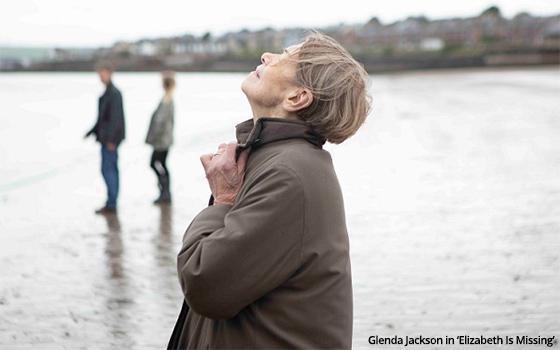 The TV Blog’s best-reviewed TV show of 2021 was an astonishing made-for-TV movie from the U.K.

It was “Elizabeth Is Missing,” first seen on British television in 2019, but delivered to U.S. audiences for the first time just this past year via PBS and “Masterpiece.”

“Masterpiece” is an appropriate way of classifying this once-in-a-lifetime TV movie that centered on a masterful performance by Glenda Jackson (pictured above), then 83, playing a woman coping with the progression of Alzheimer’s disease.

The storytelling was just as masterful as this woman solved two interlocking mysteries despite her confusion, and because of it too.

Watching Glenda Jackson’s performance was “a jaw-dropping experience,” I wrote in September. “I will venture to say that it was the most masterful performance I have seen in a theatrical or made-for-TV movie in approximately a quarter century.”

Another one of our top shows of the past year was also otherworldly, but in a very different way. It was “Resident Alien,” the Syfy series about a creature from another planet who crash landed in the western U.S. and took up residence as a naïve human in a small mountain town.

The title role was played by Alan Tudyk, who turned in what may have been the best performance by a male actor on TV all year.

In fact, four Syfy shows -- the most of any network or streaming service -- received some of the TV Blog’s best reviews this year.

In addition to “Resident Alien,” they were “Chucky,” which continued the story of the deadly doll made famous in a series of unforgettable movies; “Day of the Dead,” a zombie series inspired by the pioneering work of director George A. Romero; and “Devil May Care,” the animated series that had Satan seeking to polish his image with a publicity and marketing campaign. Thank you, Syfy.

“ ‘Turner & Hooch” is just what I needed -- a non-taxing TV show about a well-meaning man and his big lovable doofus of a dog,” I wrote in July. What more can a TV columnist ask for?

The TV Blog cast an approving eye on a number of quality dramas this year, including “The Long Song” on PBS, set in the era of slavery and emancipation in Jamaica; the lawyer drama “Delilah” on OWN; and “The Equalizer” on CBS.

Others were “Spy City” on AMC+, a sexy thriller set in 1961 Berlin; “Nine Perfect Strangers” on Hulu, starring Nicole Kidman; Showtime’s “Wakefield,” about a modern-day mental-health facility; and the action-thriller “Cowboy Bebop” on Netflix, which I just read will not be back for a second season. Alas.

An inventory of the past year’s TV Blogs reveals that only one live-action comedy received a rave here -- “Hacks” on HBO Max, starring Jean Smart as an aging comedienne modeled on Joan Rivers.

Two of the year’s best surprises were “Hart to Heart,” the Kevin Hart interview show on Peacock; and “Cher and the Loneliest Elephant” on Paramount+, a one-hour documentary about the singer/entertainer’s fight to save the life of an elephant living in cruel captivity in Pakistan. Yes, this really happened.

Speaking of documentaries, at least five other ones earn a place in this “Best of” blog -- four of them on PBS.

If that documentary represented the most in-depth, documentary-film telling of the life story of the boxing champion and cultural icon, then the same could be said of “The Real Charlie Chaplin,” Showtime’s illuminating documentary about the life of perhaps the best-known figure in the history of cinema.

Both documentaries made the same point about each of them, that in each of their times they were the most famous people on the planet Earth.