Why This College Football Playoff Looms So Large For Fans, Marketers 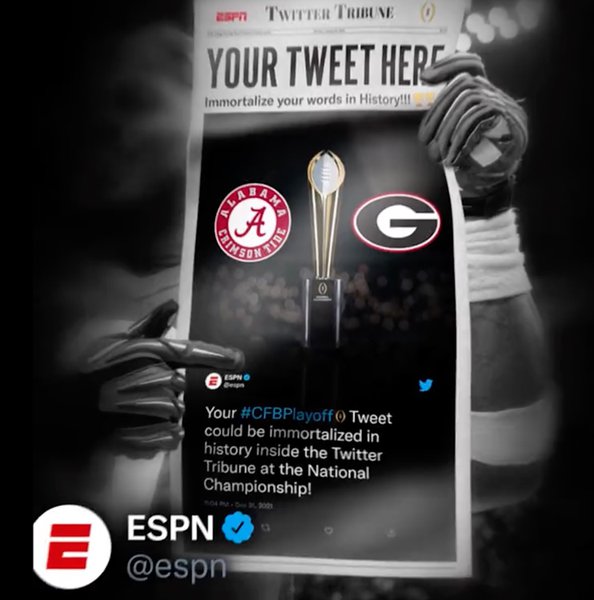 When players from Georgia and Alabama take the field this coming Monday, they'll find themselves on an even larger stage than many predicted earlier in the season.

It's not because it's likely to be a great game. Alabama already whupped Georgia last month. Nor is it all about ratings, with ESPN reporting average football viewership for college games is up 19% from last year for the season and up 2% from 2019. (Besides, it would be hard not to improve from last year. That game, with Alabama demolishing Ohio State, posted a steep ratings decline of 27%.)

However, the ongoing rollercoaster of COVID-19 cancellations has pushed college football fan passion to a strange new level.  "These events amplify the fragility of life," says Jon Last, president of Sports and Leisure Research Group. "It causes people to look at what they prioritize, and ask themselves, 'Where does college football fit in?’"

Bellwether events like the College Football Playoff "become even more significant in people's minds. They cherish these passion points more."

Marketers are keenly aware of that devotion, he tells Marketing Daily. Among the innovations they’re using to keep fans fired up? In a first, Twitter and ESPN are partnering to create the Twitter Tribune, an actual print newspaper to distribute at Lucas Oil Stadium in Indianapolis, based on fan tweets.

And in another first, ESPN will use the halftime break to air the video debut of "When I'm Gone," a music video from superstars Alesso and Katy Perry. While ESPN is no stranger to halftime musical performances, it's the first time it has dropped a video debut into a live performance.

Disney, ESPN's parent, says it's now locked in 11 sponsors, including AT&T, which returns as the presenting sponsor. Mercedes-EQ serves as the halftime entitlement sponsor, and AT&T 5G is set to sponsor the pregame showcase, with Ram Trucks covering the postgame showcase. Additional brand sponsors include Allstate, Capital One, Dr Pepper, Gatorade, Siri and Disney’s “The Bob's Burgers Movie.”

Each sponsor also has a presence in the game’s virtual experience.

Increasingly, Last says, brands recognize that even people who aren't particularly passionate about football crave those activations. "There are people who just want to be where the action is."

Live performances include Twenty One Pilots, Doja Cat, AJR, Ava Max and Pink Sweat$, appearing live in Indianapolis's iconic Monument Circle. Using multicamera technology powered by AT&T 5G, AT&T plans to give fans across the country the opportunity to create their own concert.

Of course, many are fierce fans and rabid about their teams. When the Big 10 initially said it would cancel its football season in August of 2020, Last's research company used its Back to Normal Barometer to measure that passion, asking if it would be more upsetting to see the season canceled -- or their choice for President lose the election. Fans split 50-50.

Constant concerns about rising COVID-19 cases have heightened fans' anticipation, facing the threat of cancellations. Five games had to be canceled because of outbreaks, including the Fenway and Military Bowl.

The frenzy has been intense enough to push Twitter into print publishing. Partnering with CFP and ESPN, it plans to distribute the Twitter Tribune at the game, and then mail the paper to those whose tweets are published.

It says the NCAA has noted a 48% jump in unique tweets during the 2021 college football season, with Alabama the most-mentioned team.

"There's definitely strong interest for the game," says Last. "Even under the shadow of COVID, people are pretty pumped."