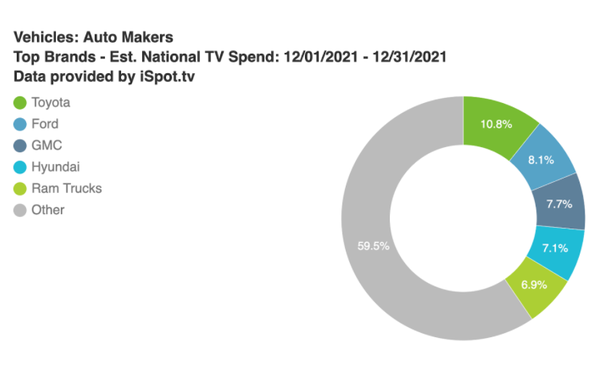 While more than 50% of Toyota’s national TV ad spend for December was dedicated to NBC and Fox (largely around the NFL), the largest percentage of Toyota impressions were actually delivered by Hallmark at 18.3%, per iSpot. Still, about 80% of Toyota’s December TV ad spend came from sports-related programming.

“Those opportunities will continue in January, as automotive brands have already been rolling out new messaging for 2022, and typically use the NFL Playoffs as a jumping-off point for the year’s new ad creatives,” Schwartzapfel tells Marketing Daily.

GMC’s increase is fueled by a greater investment in live NFL and college football games, but also the NBA (there were fewer games last December with the altered schedule) and studio shows around football as well. The brand nearly doubled its national TV ad spend (compared to last December) during NFL games, while dollars put toward college football increased by nearly four times, per iSpot.

Automakers were the No.2 industry (by share of impressions) for the NFL in December, accounting for 8.0% of TV ad impressions – just behind auto & general insurance at 8.1%, per iSpot.tv.

ESPN having at least partial broadcast rights for all of the top programs for automakers (by impressions SOV), propels the network to the No. 1 spot.

Despite the college football regular season coming to an end, ESPN is home to most of the sport’s bowl games -- including both College Football Playoff semifinal games that aired  Dec. 31.