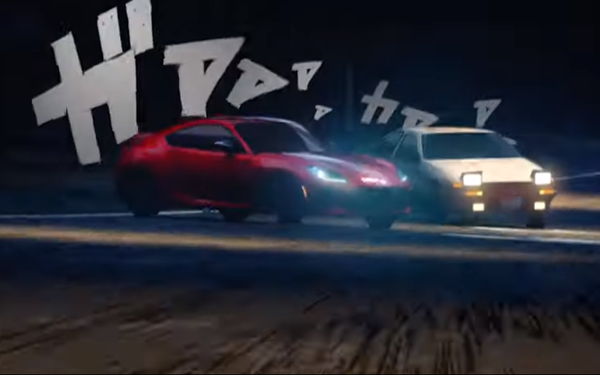 The company said the campaign was developed for precision and performance-focused driving enthusiasts “considering the transcultural mainstream audiences across America.”

One component of the campaign, created with agency Intertrend taps into Japanese sports car heritage via anime and mangas animated art forms. The agency and carmaker collaborated with the creators of Initial D, the Japanese street racing print series that features Toyota’s legacy AE86. The result was a new video content series that highlight’s the 86’s heritage and introduces the vehicle’s next evolution with the GR86.

Spots were directed by Annis Naeem and can be viewed here.

Conil developed a series of spots for social and digital platforms featuring enthusiasts who drive for living (a taxi driver, paramedic among others) who demonstrate how a car developed for the race track performs on city streets.

Saatchi & Saatchi developed a series of spots with well-known racing drivers like Stepan Papadakis, Ryan Tuerck and others who demonstrate how the GR86 is made to “unlock the potential of any driver on any road for everyday driving.”

Toyota Marketing’s Lisa Materazzo said the team behind the new GR86 “looked to engineer even greater curve-hugging precision and performance with this next generation coupe, and we’re excited to bring that to life in this new campaign.”

The campaign extends across digital video, programmatic, paid social, print and experiential. Partners include Amazon, Bleacher Report, Canela, Disney, Xbox One, Reddit, Facebook, Instagram and others. A number of sponsorships are also planned for concert and sporting events.