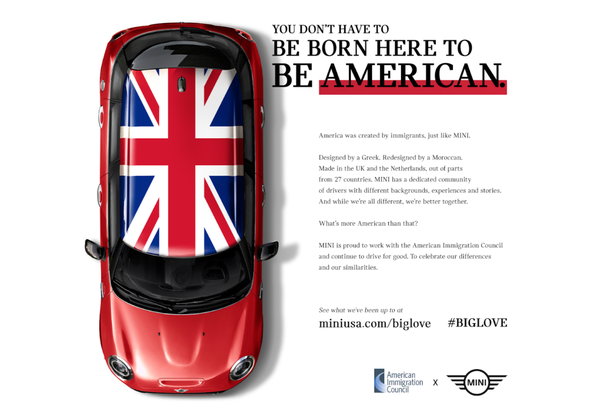 Mini USA, in support of its partnership with the American Immigration Council, has created advertising that aims to make a strong statement about how being American isn’t about where you are born.

The automaker hopes to help support immigrants with a message about how being American is about celebrating our differences, experiences and stories, says Rah Mahtani, brand communications manager, at Mini USA.

“We chose print because it felt appropriate for the weight of the message,” Mahtani tells Marketing Daily. “With fewer advertisers choosing to spend in traditional media, the instances in which they do carry a little more gravitas. It was our hope that readers seeing these ads in these places showed that this is something we care about.”

Mini is a British car brand still built and manufactured  at the original Mini plant in Oxford, England. It’s also owned by the German automaker BMW Group. But the brand is still American and is loved by Americans of all ages, races and genders, Mahtani says.

The latest creative is part of an effort that began last year where the brand enlisted immigrants and first-generation Americans to create custom rooftops for the automaker.  The project was announced on National Immigrants Day, which is Oct. 28.

The fully integrated global digital and OOH campaign has resulted in praise for the artists, thousands of video views, comments, and shares, as well as hundreds of customers looking for a chance to buy the roof graphics, which will offiicially go on sale in the back half of first quarter, he adds.