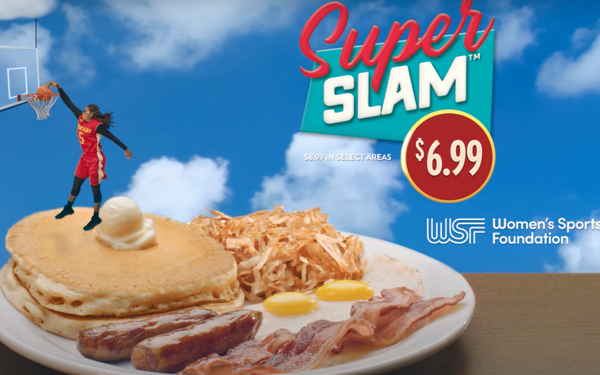 With revenues back to pre-pandemic levels, Denny's is upping its expansion game. Among them: a partnership with Reef, a ghost-kitchen operator, to help it expand in urban areas, as well as a Super Slam promotion aimed at encouraging women athletes.

The Spartanburg, South Carolina-based chain says the deal with Reef, the largest operator of virtual restaurants, will focus on metro areas.

Without naming the test markets, the company says the arrangement is the next step in efforts "to extend the reach of Denny's brand through online and delivery channels using our existing network of restaurants," says John Miller, Denny's chief executive officer, in its announcement. "We look forward to reaching even more guests with Reef, particularly in key under-penetrated metropolitan markets with high consumer demand for delivery."

The company plans to offer key signature dishes through Reef, including its "Grand Slamwich" and "Moons Over My Hammy," and fan favorite "Grand Slam" breakfast.

Denny's also announced preliminary fourth-quarter results, revealing that sales exceeded pre-pandemic levels. Same-store sales in the quarter gained 5.1% from the 2019 period. It reiterated its guidance for the months ahead, despite some uncertainty about Omicron.

The chain also rolled out a campaign to support women's college athletes. That effort links the incredible Fran Belibi, a Stanford junior forward who is one of only eight women to ever slam dunk in a college game, to a promotion for its Super Slam breakfast offering.

Partnering with the National Collegiate Athletic Association Women's Basketball Champion is the latest in the brand's initiatives involving student-athletes. (The first part of the campaign started in the fall, celebrating offensive linemen as part of its cleverly named All Pancaker Team.)

*Correction: Billie Jean King is the founder of the Women's Sports Foundation.