Olay Teams Up With 'Ebony' Magazine In Latest STEM Push 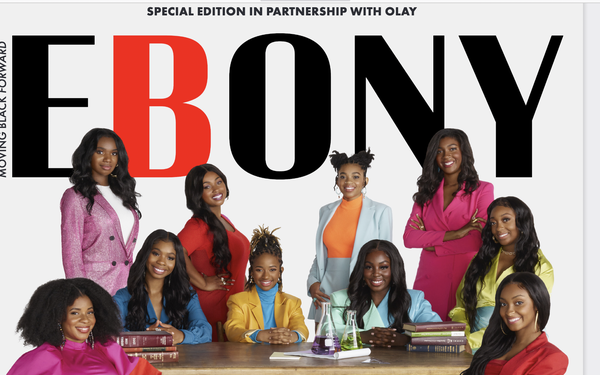 As part of efforts to end gender bias in education, campaign, Olay has found a new way to nudge young women of color toward the sciences: a glam awards program with a good old-fashioned magazine cover.

The Procter & Gamble-owned beauty brand says the limited edition print issue -- Ebony’s first since 2019 -- is the next step in its goal of encouraging women of color to pursue careers in science, technology, engineering and math. The effort also helps focus attention on the role historically Black colleges and universities play in promoting these careers.

The Ebony edition attempts to show younger girls “some role models and give them inspirational leaders to look up to,” says Loren Fanroy, senior communications manager for Olay Skincare North America. It gives the Olay brand “the right platform and the space to talk about Black women who are making amazing strides for themselves.”

The special issue celebrates 10 “STEM Queens” from HBCUs, selected by voters on Ebony’s website. Each of the ten winners gets a $10,000 grant, mentorship options from women scientists at P&G, and a trip to Los Angeles for the awards.

And why a print magazine in an era when they’ve become dinosaurs? “Ebony is such a legacy media for African-American culture, history and entertainment,” says Fanroy. “It’s been part of the culture for decades.”

Ebony will sell the issue on select newsstands.

Fanroy says it’s just one more way to get people talking about disparities in STEM. “Women account for just 27% of those jobs,” she says, “and [percentages are] even lower for Black women.”

She tells Marketing Daily the project seemed a natural fit for Olay. “We’re trying to do more to highlight this lack of representation, and we hope this encourages more young girls and young women to pursue STEM and stay on that path once they start.”

Fanroy says research continues to explore the best age to reach young women, with some studies showing it’s important to start as early as preschool. (Olay rival Dove just released a video highlighting the fact that hair-based discrimination impacts girls of color as early as five.)

Middle school continues to be a critical window, “with a drop of almost 50% in girls pursuing math or any other STEM field," says Fanroy.

“For girls, that’s just a time of lots of changes, and maybe losing confidence. If they’re not seeing other women and young girls pursuing STEM or feeling encouraged by people around them, that’s got a big impact.”