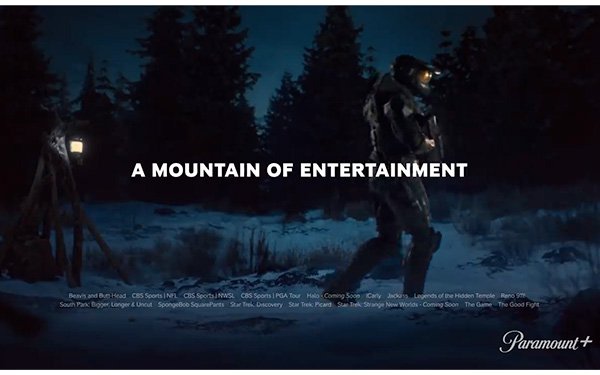 ViacomCBS used the airing of CBS’ NFL’s AFC Championship game on Sunday to launch a new advertising campaign for its streaming platform Paramount+, under the “Mountain of Entertainment” theme.

Paramount Pictures' longtime iconic logo -- Paramount Mountain -- was the backdrop for a cross-section of ViacomCBS talent that participated in the spot, centered around a campfire.

The spot had a voiceover from singer/songwriter Tim McGraw, who is in the Paramount+ series “1883.” The tagline from the voiceover is: “Back on Paramount Mountain, where entertainment lives.”

ViacomCBS’ bonfire theme was in reference to the forthcoming “Halo” TV series on Paramount+ later this year. Creative on the campaign came from agency Droga5.

A year ago, ViacomCBS’ Paramount+ had the benefit of running a multi-promotional spot during the airing of its Super Bowl, also under the "Mountain of Entertainment" theme. Some 30 stars participated.

Last year, 87,399 Paramount+ promotional and paid advertiser airings pulled in 21.7 billion impressions, with a total paid spend/media value of $155.3 million, according to iSpot.tv.