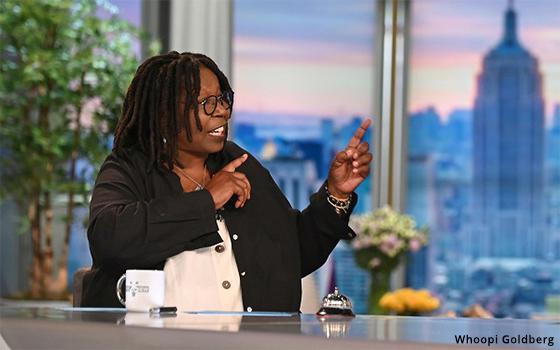 “Goldberg” is generally acknowledged as a Jewish name, and Whoopi Goldberg has said that she took it as a stage surname because it was a name that turns up in her family lineage.

She has even claimed to be at least part Jewish. And yet, remarks she made on “The View” on Monday revealed that she is ignorant of the nature of the Holocaust.

Goldberg, 66, just got suspended from ABC News for two weeks for the remarks. ABC News oversees “The View.”

During this fortnight, it is reasonable to hope that she will use this time off to check out some history books from her local library so she can bone up on the Nazis.

Of course, 14 days is a ridiculous “punishment.” It is so short that the “The View” and its audience will hardly know she’s gone. Actually, it’s more like a vacation.

Whoopi’s statement was deemed offensive because she seemed to minimize (if not dismiss completely) the issue of race as it pertained to Nazi philosophy.

On the contrary, as almost everyone else on Earth well knows, the issue of race was at the core of Nazi philosophy.

Not that it needs spelling out, but here is a brief summary: Inspired by Adolf Hitler, the Nazis believed that many, but definitely not all, Germans constituted a master race that stood in superiority to all other groups who the Nazis classified as other, inferior races.

Thus, the Holocaust of the Jews can be considered to be racially motivated (to say the least) because the Nazis categorized them as a race, despite the fact that they were white.

Perhaps this is what confused Whoopi Goldberg. In her remarks, she seemed to be of the opinion that the mass killing of Jews was not racially motivated because the Jews and the Nazis were both white. So how could it be racial?

The statement she made, reported everywhere in the last few days, was brief. “The Holocaust isn’t about race,” she said on “The View.” “It’s about man’s inhumanity to man.”

The latter sentence is accurate. Certainly, no one would argue that the Holocaust was inhumane. But her first sentence was not accurate for the reasons cited above.

So how did this brief statement make it out of the “The View” and into the glaring spotlight of the court of public opinion?

Some of the news stories say that rank-and-file staffers at ABC News were the ones who became enraged and raised the statement to the level of a furor.

This might be one reason why ABC News President Kim Godwin felt obligated to impose her sentence of two weeks off for Whoopi.

And what of Whoopi’s self-proclaimed Jewishness? In a 2011 interview with the Jewish Chronicle, based in London, she insisted that she comes from Jewish ancestry.

“Goldberg is my name,” she said. “It’s part of my family, part of my heritage, just like being black.”

“I just know I am Jewish,” she told the paper. “I practice nothing. I don’t go to temple, but I do remember the holidays.”

According to Wikipedia, which cited a book written by Prof. Henry Louis Gates about his experiences researching the ancestry of notable African Americans, extensive research he performed in 2006 found that “all of Goldberg’s traceable ancestors were African Americans, that she had no known German or Jewish ancestry, and that none of her ancestors were named Goldberg.”