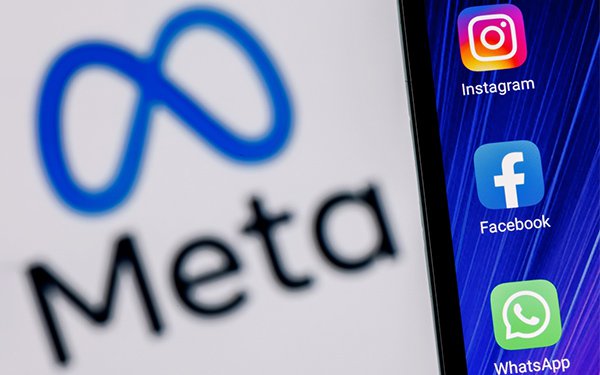 Meta’s share price plunged 26% on Thursday, wiping out $237 billion in market value, after it reported fourth-quarter earnings that missed Wall Street expectations and the first decline in Facebook daily users in its 18-year history — and warned that iOS privacy changes and "macroeconomic challenges” will continue to impact its advertising in the months ahead.

It was the biggest one-day loss for a publicly traded company in the history of the stock market. Heavily tech-dependent U.S. stock indexes fell following the report.

The company noted that Facebook’s 1.93 billion total in the month of December was up 5% year-over-year, and its monthly active user (MAU) total of 2.91 billion as of year-end was up 4% year-over-year.

But daily users across all of its social apps — Facebook, Instagram and WhatsApp — rose by just 10 million quarter over quarter, to 2.82 billion.

Advertising impressions across its apps rose 13% YoY in Q4 and 10% YoY for the year, and average price per ad rose 6% in Q4 and 24% for the full year.

But in a call with analysts, Meta CFO David Wehner reported that Apple’s iOS privacy policy changes could impact Meta’s 2022 advertising revenue “in the order of” $10 billion, by reducing tracking effectiveness for Facebook and Instagram advertisers.

Meanwhile, Google and YouTube not only have access to their own massive user data, but a highly beneficial relationship with Apple — one that Wehner suggested is problematic for Facebook.  "Given that Apple continues to take billions of dollars a year from Google Search ads, the incentive clearly exists for this policy discrepancy to continue," he said.

CEO Mark Zuckerberg said that Meta faces “macroeconomic challenges” ahead as it transitions to a focus on the metaverse.

That shift will take years — some think a decade or more — and other companies are also pushing hard into the metaverse space.

Zuckerberg said that Meta is immersed in developing the “foundational hardware and software required to build an immersive internet,” and isn’t expecting any strategic leaps in the year ahead.

Meanwhile, Meta will also increase its focus on short-form video. including its Reels product.

“It is clear that short-form video will be an increasing part of how people consume video going forward,” he said, adding that Meta’s new Reels format “is growing very quickly” and is “already the biggest contributor to engagement growth on Instagram.”

Reels is similar to and designed to take on TikTok, which Zuckerberg uncharacteristically admitted flat-out is a “big competitor already,” and “continues to grow at a very fast rate off of a very large base.”

He also acknowledged that Meta’s ad system is “not tuned to the new formats,” although adding that the resulting “headwind” should affect the company only in the near term.

In his outlook summary in the Q4 earnings release, Wehner said Meta expects total Q1 2022 revenue to be in the range of $27 to $29 billion, translating to year-over revenue growth of 3% to 11%--reflecting “headwinds to both impression and price growth.”

Impressions will continue to be affected both by “increased competition for people's time and a shift of engagement within our apps towards video surfaces like Reels, which monetize at lower rates than Feed and Stories,” he wrote.

On the pricing side, growth is expected to be negatively impacted by “modestly increasing ad targeting and measurement headwinds from platform and regulatory changes,” adding that advertisers are reporting that “macroeconomic challenges like cost inflation and supply chain disruptions” are impacting their budgets.

Foreign currency exchange rates are also expected to affect growth, and threats to the viability of transatlantic data transfers could impact Meta’s European operations, he said.

The company’s virtual reality hardware, software and content business, Reality Labs, lost $10 billion last year, but will not be a significant driver of capital expenditures in 2022 because they do not currently require substantial capacity, he said.

"I'm encouraged by the progress we made this past year in a number of important growth areas like Reels, commerce and virtual reality, and we'll continue investing in these and other key priorities in 2022 as we work towards building the metaverse," Zuckerberg summed up in a statement.

As of Q4, Meta began reporting its results based on two segments: “Family of Apps” (FoA), which includes Facebook, Instagram, Messenger, WhatsApp and other services; and Reality Labs (RL).

Meta also announced that its NASDAQ trading symbol will change from FB to META sometime during this year’s first half.