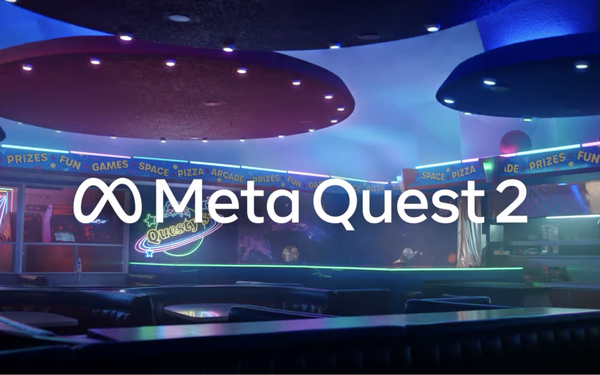 As Meta prepares for the Super Bowl, it is coming off a fourth-quarter earnings report that included its first-ever quarterly decline in daily active users (DAUs).  The abandonment by younger users partially explains Facebook's pivot to the metaverse and the decision to change the company name to Meta in October.

Meta's Super Bowl teaser, via Anomaly, features a shot of a virtual hangout called Questy’s. Questy’s looks a little worn, as the ad shows the restaurant at night, when it’s empty and dark (except for a flickering neon sign).

The ad is a direct reference to the Oculus Quest 2 headset, which Meta released last fall. Questy’s is actually a virtual hangout in Oculus that is a portal to games and other activities.

The music in the ad is a callback to TV themes of the 1980s that advance a good-timey virtual reality experience and a sign that Meta wants to leave behind the Internet and social media and instead usher users into a virtual world.

A full 60-second version of the ad will run in the first quarter of the Super Bowl.

The earnings also came as Alphabet, Microsoft and Apple have all beaten analysts’ estimates.

Many analysts cited TikTok as a primary reason for Meta’s loss of younger users. The number of teen users of Facebook fell by 13% since 2019, and were projected to drop by 45% over the next two years. The number of 20something users was expected to fall by 4% over the same time.

Jasmine Enberg, a senior analyst for social media at Insider Intelligence, told Marketing Daily that the user declines are the biggest threat to Meta’s ad business. “Right now, the recent shift in consumer behavior, which has been driven by TikTok, has kind of managed to achieve what years of negative press and even Apple's privacy changes couldn't,” she said. “The reality is that Meta, particularly Facebook, has a young-people problem. And if young users continue to avoid Facebook, and even avoid Instagram, advertisers will eventually follow suit.”