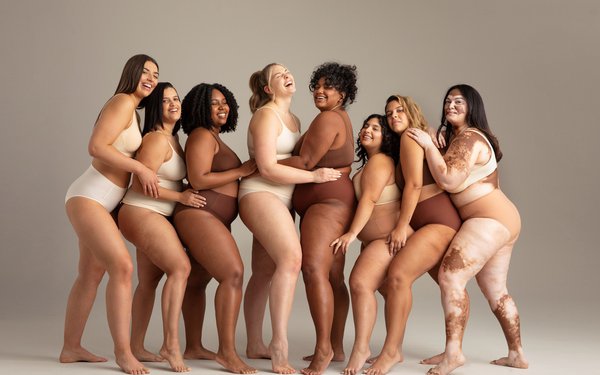 Shapermint knows that when it comes to body image, social media is a double-edged sword. So it’s hoping to use raw photography in a campaign to connect with the millions of women who have a baffling relationship with their news feeds. It even includes a “Perfect Shape Filter,” which aims to tell women they are perfect just the way they are.

Themed “Step Forward Into Self Love,” the new campaign “builds on our main purpose, to help women with body acceptance and self-confidence,” says Massimiliano Tirocchi, chief marketing officer and co-founder.

The campaign stars both models and customers, their images all unapologetically unretouched and unedited.

“We’re trying to pull our community into the center of the conversation,” Tirocchi says. “And we’ve timed it to run around Valentine’s Day because we often forget that the relationship we have with ourselves is so important."

The effort is based on the company’s poll of 3,000 women, asking how they use social media and how photography, editing and filters make them feel about themselves.

Among the results: Women who rarely post on social media are 16 times more likely to feel bad about what they see than frequent posters.

A majority -- 61% -- of frequent posters say they know it hurts their body image but do it anyway. And 69% spend at least three minutes editing photos of themselves.

Tirocchi tells Marketing Daily that the results surprised him. “I kept thinking, 'Why are you doing this if it makes you feel bad?’”

Follow-up conversations with women uncovered more complexity, often highlighting an internal struggle. Some women wanted to post images of themselves and even felt they should do so. “But then there’s this pressure that if they don’t post the perfect picture, it will be worse for them,” he says. “I wasn’t expecting that.”

The company decided to field its research after seeing widespread news reports of social-media toxicity. Those reports included testimony from the Facebook whistleblower revealing a study in which 32% of teen girls said that when they feel bad about their bodies, Instagram makes them feel worse.

“That inspired us to move forward and learn more,” Tirocchi says.

He concedes that the poll findings present a significant dilemma for D2C brands, especially those selling products so intrinsically linked to body image. Social media is the best way to reach young women. Yet it’s also harmful to many of its target customers,

Going forward, he sees a more prominent role for YouTube, with longer and more educational videos, as well as other types of content. “And it’s part of our responsibility as a brand to use social media in a proper way and communicate in ways that further these types of conversations.”

The new ads, photographed by Ashley Batz, are a distinct departure from the company's previous comic efforts, like its much-viewed and sassy Venus de Milo or a more recent spot welcoming women back to getting dressed.

Shapermint, with 4.5 million customers and more than $250 million in sales, also includes Truekind, which sells bras.