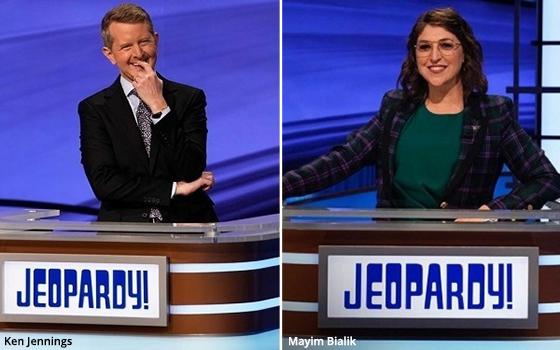 Even after all of the uncertainty and chaos that characterized “Jeopardy!” last year over the seemingly simple task of naming a new permanent host, the job is still up for grabs.

The choice seems to have been whittled down to two aspirants for the job -- sitcom actress Mayim Bialik, 46, and “Jeopardy!” champion Ken Jennings, 47.

But if it is to be one of them, why hasn’t it happened yet? Are they in fact the last candidates standing, or is “Jeopardy!” still scouring the Earth for someone else?

Without rehashing all of the details of “Jeopardy’s” year of living dramatically in 2021, the story went like this:

Following the death of Alex Trebek in November 2020, the show featured a parade of celebrity guest-hosts from January 2021 until well into last summer. Then it was decided that the then-executive producer of the show, Mike Richards, would become the host.

But the host job was yanked from beneath him days later following revelations that he made naughty comments in a podcast he hosted years ago. Soon thereafter, he lost the executive producer’s job too.

The show then announced that Jennings and Bialik would split the hosting duties “as their schedules allow.”

Since that announcement was made way back on September 16, it was easy to forget that it called only for Jennings and Bialik to share the job “through the end of the year.”

Well, the end of the year has come and gone, and no decision on a permanent host has been announced.

Nor have any other names of possible candidates appeared anywhere since at least last summer. In the meantime, the two temporary hosts soldier on.

So far this year, the two have both hosted the show, with Jennings getting to preside over most, if not all, of the second-longest winning streak in “Jeopardy!” history -- 39 games won by Amy Schneider that began last November 17 and ended January 24. Jennings himself is No. 1 with 74 wins.

In an interview last month on “Watch What Happens Live” with Andy Cohen, Schneider said she hopes Jennings gets the permanent job.

The two temps have each admitted that they want the job. Bialik said so in a guest-essay on Newsweek.com last fall.

“When I left ‘The Big Bang Theory,’ I said that there would never be another job like it,” she wrote. “It was the best job I had ever had, besides being a parent.

“I can now say that there is no other job I’d rather have than this job on ‘Jeopardy!,’ I joke that I would give up my first child to host permanently!”

As for Jennings, he told USA Today last November that “if my country called upon me to host ‘Jeopardy!’ I would happily do my patriotic duty.”

He then described how the show has been a part of his life since childhood. “That show is my first love. Even as a little kid, I would run home from school every day to watch.

“It’s just a big part of who I am and the person I became, even before I was on the show. So, it’s just enormously flattering to be in the mix.”

Both of these frontrunners for the host job are at least gainfully employed. Bialik stars in the Fox sitcom “Call Me Kat.” Last year she reported that she directed a movie, “As Sick As They Made Us,” starring Dustin Hoffman and Candice Bergen.

Jennings joined the staff of “Jeopardy!” in September 2020 with the title of consulting producer. His hiring fueled speculation that he would be groomed for the host job and might even slide into it upon Trebek’s death, which at that time was inevitable.

Jennings also took up opportunities offered by other quiz shows, “The Chase” on ABC and “Masterminds” on Game Show Network, as an in-house expert and trivia champ on both shows.

On “Jeopardy!,” both Bialik and Jennings have done well in their hosting stints. But it is also true that they lack a certain undefinable something that Alex Trebek possessed.

Maybe talent and confidence like Trebek’s has to be learned and earned over time. In this contest for the host job, may the best man or woman win.

television
1 comment about "Hard To Believe, But 'Jeopardy!' Host Job Still Unsettled".
Check to receive email when comments are posted.
Next story loading