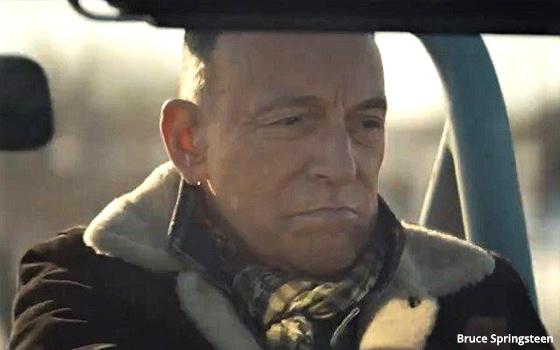 As George Harrison once sang long ago, beware of sadness.

This was one of the themes that recurred again and again in past Super Bowl columns here about the telecast’s commercials.

In each instance, the TV Blog lamented the ad biz’s emphasis on sad, negative copy and imagery in the midst of a de facto holiday -- Super Bowl Sunday -- that annually unites the nation.

One such spot was seen just last year -- the Bruce Springsteen spot (pictured above) in which “Buzzkill Bruce” (as he was designated in the blog’s headline) was seen driving unhappily in a white Jeep in the middle of nowhere and complaining about America.

“Is it too much to ask of one of our premiere rock stars that he lighten up when he comes to a Super Bowl party?” asked the blog’s lead sentence.

The opinion here was that Springsteen’s glum, frowning face was no way to drum up enthusiasm for this car. “The takeaway: ‘Jeep: The Preferred Vehicle of Grumpy Old Men’,” the blog said.

Another example was a 2019 spot for the Kia Telluride SUV. This one featured a sad little boy who was seen and heard describing his small Georgia town in a dull, dispirited monotone.

This monologue was actually supposed to celebrate the fact that Kia had established a factory there that presumably employed hundreds of townsfolk to assemble its Tellurides.

In the process, the company probably helped restore this apparently beleaguered region to economic health, which sounds like a cause for celebration, not lamentation.

To put it mildly, this approach to what was essentially a good thing was a head-scratcher, and once again the old refrain: Debbie Downer has no place at a Super Bowl.

“The face and voice of a sad little boy has no place in a joyous, fun environment such as the Super Bowl,” thundered the dissatisfied TV Blog that year.

“This leaden commercial had the effect of stopping any fun you might have been having watching the game dead in its tracks. One thing it didn’t do: Make you excited about the Kia Telluride.”

Another subject raised repeatedly in past Super Bowl blogs was the issue of memorability. Time and time again, the TV Blog noted that the expense and high production values of some spots were not worth much if the brands that the spots were supposed to sell were obscured to the point of invisibility.

A Super Bowl column in 2017 was entirely devoted to this subject. It noted that in order to jog my memory, I often had to look up some of the ads online on the morning after to learn who or what they were for.

One paragraph of many was typical: “There was [one] spot -- a comedic one -- early in the game that showed the members of a secret society having a conversation on the subject of secrecy. On Monday morning, I had to look it up. Oh, it was the avocado commercial.”

Another mini-trend the TV Blog decried was the use of the voices of two 1960s martyrs -- President Kennedy in 2015 and the Rev. Martin Luther King Jr. in 2018 -- in spots for Carnival Cruises and Dodge Ram trucks, respectively.

“What’s next?,” asked the TV Blog in 2018, “Martin Luther King Day spots with actors costumed as King declaring that they ‘have a dream’ about big savings at your tri-state Dodge dealers?”

The Super Bowl TV Blogs here were not all bad, however. Generally speaking, the blogs championed dozens of spots that were designed to be comedic and lighthearted, in keeping with the overall spirit of the Super Bowl, which is, after all, just a football game.