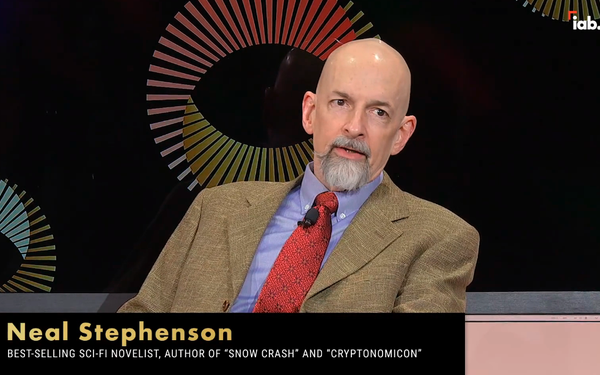 The highlight of my week was watching visionary science fiction author Neal Stephenson being interviewed during the Interactive Advertising Bureau's conference Wednesday. Or maybe it was my lowlight. It certainly ended on a low point for Stephenson who when asked to describe the current state of an internet he helped conceive, characterize it in dystopian terms.

"I don't want to go out on a gloomy note," he said, "but it's created a breakdown in our society, not just in the United States, but in a lot of other countries, in how people relate to each other, even within families. How institutions work. It's something we have to fix."

I assume I'm not the only one to find Stephenson's gloom ironic, given that to many of his fans, he is one of the people who helped create it, as well as an even more unknown Web3 versions we are just now entering.

Stephenson is among the early 1990s cyberpunk writers who helped conceive -- and likely influenced the creation -- of the internet as we know it, and he's also considered by many to be the father of the metaverse (which he coined in his 1992 novel "Snow Crash"), as well as cryptocurrency(ditto his 1999 novel "Cryptonomicon"). So if he's bummed out about the state of things, then I'm really worried, because this guy can literally see into the future.

Stephenson alluded to the need for some "big structural changes in how the internet" works, as well as how the big companies that currently dominate it make their money and maintain their stock market valuations.

From a political media and marketing point-of-view, you don't need to look into the future to understand why Stephenson is having a bummer.

He said political operatives have "completely gamed" the internet, beginning with the Obama campaign's innovative use of digital media in 2008 and 2012, but then the other guy's efforts in 2016, with some able assists from other, how shall we say, unattributed sources.

"Now to nationally and internationally game the way social media works to conduct psychological operations and affect the outcomes of elections and all kinds of other things, and the internet as constituted is almost totally defenseless against that," he explained, adding, "I mean almost every effort we've seen by social media companies to try to remedy that and put in place various fixes hasn't worked, because it's just inherent in the way the internet is structured that there are no fixes that can scale. So that's the state of the internet now."

Hmmm, I wonder who could have predicted this might happen?