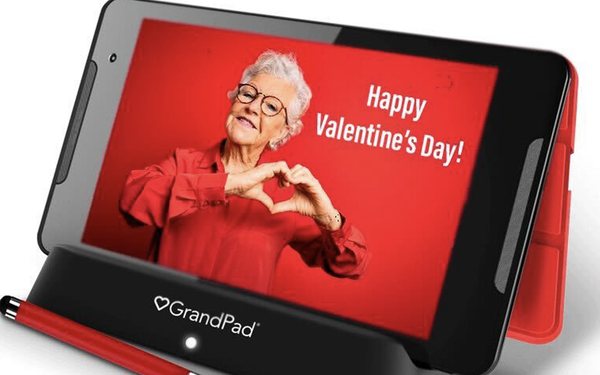 GrandPad, a subscription service for people over 75 that features its own tablet from company investor Acer and LTE connectivity via cellular carriers, is running a campaign inviting its 1.3 million users and others to share stories of love among the elderly.

The campaign is being promoted via daily social media posts and emails, video calls with GrandPad users, and a public relations program from Tabor PR.

“Grand Love Stories” is part of a larger campaign, “Love is Ageless. Love is Grand,” which reminds consumers to connect with elderly adults on Valentine’s Day “to help ease loneliness and celebrate all forms of love.”  Among the suggested activities: write a poem, send a video message, share a virtual meal or prepare a playlist.

The product’s target audience includes not only the elderly, but also their relatives, who often make the purchases. “When the pandemic hit, our solution became a lifeline for families who could not connect with elderly loved ones,” Carvey said, adding that “since the onset of COVID, we have also seen a significant increase in the acquisition of GrandPad among clinical organizations like PACE [a Medicare/Medicaid program], home healthcare organizations, companion care organizations, and community service organizations.”

One nonprofit, the Omaha-based Dreamweaver Foundation, announced this week a nationwide expansion of its distribution of GrandPads to terminally ill seniors. Its executive director, Cheri Mastny, called the service a “direct connection to video-chat and share memories with family and friends as often as they’d like.”

GrandPad offers a Family Companion App that allows relatives and caregivers to connect to the platform. In December, the company reported that it had been downloaded 600,000 times.

Priced at $89/month or $65/month via a prepaid annual subscription, GrandPad is available online or from distributors like Consumer Cellular in the U.S. and TechSilver in the UK and Ireland.