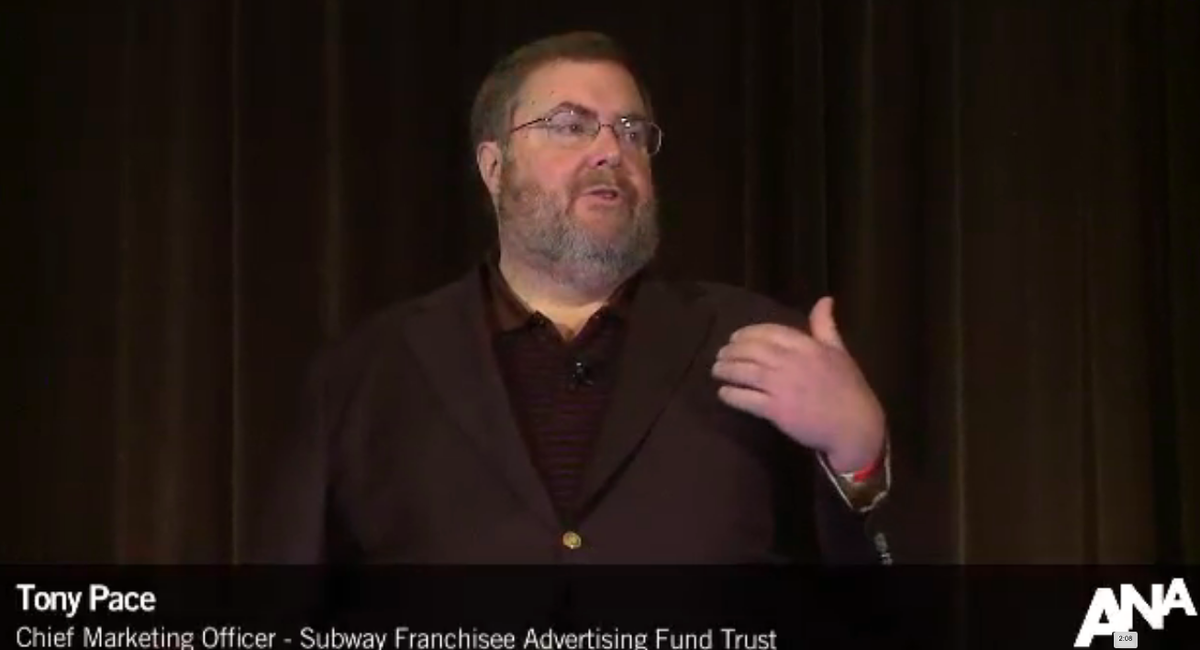 The ANA first encountered Tony Pace back in February 2010. He was a speaker at the ANA TV & Everything Video Forum, held at the Grand Hyatt in New York City. He was CMO at the time of what was called, “Subway Franchisee Advertising Trust Fund.” I had the honor of facilitating the Q&A after his prepared remarks. That was at the height of the $5 footlong offer and I remember getting into a debate with him on stage regarding how long Subway could stick with that campaign, since their ingredient costs would certainly rise. But Tony kept the $5 footlong campaign around long enough for it to become the company's most successful promotion ever and make Subway the fastest growing franchise in the world.

We knew we had something good with Tony so we kept inviting him back to speak at ANA events. He was on our CMO Roundtable panel at the 2011 Masters of Marketing Conference. When asked about Subway’s target audience, Tony replied, “If you have a mouth and a wallet, you’re a potential customer.”

Tony was a huge believer in branded content and felt that traditional product placement was a thing of the past. At our 2013 Media Conference Tony talked about content having a foundational role in Subway’s media plan … “being seamlessly integrated into the storyline in a non-intrusive way, like we belong there.” Tony talked about “message integration” and aligning with the right partners to working a brand message organically into programming. He was proud of integrations on shows like "The Biggest Loser" and "Jimmy Kimmel Live!."

Tony joined the ANA board around 2012 and his leadership qualities were so obvious that he became our board chairman a few years later. His tenure as chairman coincided with work we did in 2015 and 2016 on media transparency – perhaps the biggest story in the ad industry at the time. We worked closely with Tony on that project and the end result was the K2 Intelligence report, “An Independent Study of Media Transparency in the U.S. Advertising Industry.” The findings made the entire industry uncomfortable, but Tony was a strong advocate for releasing the full report and getting the truth out there. We couldn’t have done it without him.

When Tony left Subway, we stayed close. He joined MASB (the Marketing Accountability Standards Board) as president-CEO. Tony had a keen interest in sponsorship. In 2018, ANA and MASB worked together on a project to provide greater insight and guidance into sponsorship measurement. The result was the paper, “Improving Sponsorship Accountability Metrics.”

Tony was a proud graduate of Notre Dame and credited his gig there as the editor-in-chief of the student newspaper, The Observer, for igniting his interest in the advertising and media industry. I went to Boston College and reminded Tony about a BC win over Notre Dame in the Lou Holtz era that cost his alma matter the national championship. He retorted, “Do you know what we call BC at Notre Dame? Back-up College.” Funny guy.

There is an exit on Interstate 95 in Connecticut for Milford, CT where Subway headquarters is located. BIC Corporation is at the same exit … Exit #35, I think. For years the exit sign read “BIC Drive.” I remember Tony telling me how he helped lobby the government powers that be to change the exit to, “Sub Way / BIC Drive.”  Yet another example of Tony’s gift for branding.

It was our honor and pleasure to know Tony Pace. And we considered him a friend. We were fortunate to have had that privilege.