Lumin 'Mansplains' Why Men Should Care More About Skincare 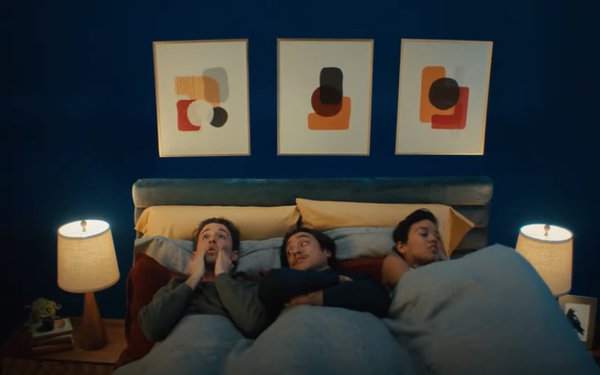 That’s because while many men prioritize their physical well-being, they tend to ignore one of their most prominent features: the face.

Premium brand Lumin Skincare wants to change that by dismantling the cultural stigma that discourages men from caring for their facial appearance the same way women have always done.

Lumin launched its products—among them Dark Circle Defense for under-eye “bags”—in 2018 by D2C. It’s about to enter the brick-and-mortar space with distribution in select Target and Walmart stores throughout the country.

The retail debut is supported by Lumin’s first advertising campaign, which is running on digital and connected-television platforms in programming and events that include the Winter Olympics and March Madness basketball playoffs.

Mills portrays a “skincare guide” who busts in on men in their homes to question their stubborn views and beliefs. In this spot, he pops up in bed to lament a man’s “poor pores” and suggest he imitate his girlfriend’s skincare regimen.

In this interview, edited for brevity and clarity, Lumin general manager Kevin O’Connell talks about tackling male misconceptions and why humor is the best approach.

O’Connell: There’s this kind of cultural stigma against guys doing skincare. Also, they don’t know a lot about it. So it’s actually a category where they need a lot of help and explanation.

In real life, a guy will ask his wife or sister and they will solve that problem for him. But obviously, not every guy has that luxury. So one of the big value-adds we provide is speaking for them.

CPG FYI: Who is the target audience for the campaign?

O’Connell: It’s particularly millennials. Products like Dark Circle Defense address a specific pain point that guys have as they get a little bit older. We do have a lot of Gen Z customers as well, but some of the pain points they’re trying to solve will differ.

CPG FYI: Why did you decide to take a humorous approach to advertising?

O’Connell: The reason humor works well is because you have to disarm people and break down some of their pre-held notions. Our customers say that once they get into a skincare routine, they tend to actually look forward to it. So we thought humor would be a good way to shine a light on some of the things that guys perceive about skincare right now that don’t make a lot of sense.

CPG FYI: Is part of the issue that men just don’t care what others think of their face?

O’Connell: One thing we’ve heard a lot from customers who are Gen Z and millennials is, with the proliferation of social media and being on Zoom all the time, your face ends up being a lot more front and center. Especially if you’re on a dating app. Somebody’s judging you based on your face. So I think a lot of the concerns women have had for a very long time, guys are starting to feel more as well.

CPG FYI: How did you get distribution at Target and Walmart?

O’Connell: We have a large online business and social media following. So when we go in to pitch companies like Target and Walmart, we can show them the track record of sales and the customer following.

Also, we’re bringing the quality that you would traditionally find for guys in Nordstrom or Bloomingdale’s to mass retail. We think our products are a lot better than what the current options are in retail, but we also want to bring it to where they’re shopping. Guys are going to Target and Walmart already.