Grateful Nation Revels In News That Gumby Is Coming Back 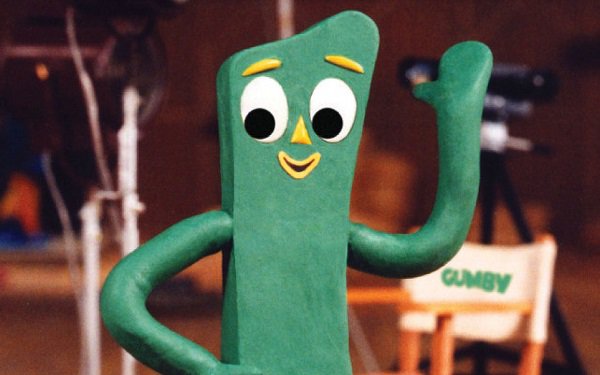 A feeling of elation and celebration undoubtedly swept the nation last week when the news broke that Fox Entertainment has bought Gumby -- lock, stock and barrel.

Here in the home office of the TV Blog, champagne corks would have assuredly been popped if we had any champagne.

Incredibly, Gumby had been gone so long that he slipped my mind until Fox’s announcement on February 8. Then I remembered: I love that guy! And then I thought: Who doesn’t?

“Fox Entertainment has obtained all rights to the popular [Gumby] franchise, including film, television and streaming, consumer products, licensing, publishing and all other categories,” said this press release, which arrived out of nowhere, and in so doing, elevated my mood almost immediately.

Yes, it’s Gumby, dammit! -- strange, green visitor from a bygone era of television who burst into America’s homes in 1955 with infectious enthusiasm -- and an equine best friend named Pokey, dog Nopey, pals Prickle and Goo, and a helpful bee called The Groobee. (These and other incredible facts about the world of Gumby can be found at this amazing website: www.gumbyworld.com.

Fox purchased these Gumby assets from the estate of Joseph Clokey, the late son of Gumby creator and master of stop-motion animation Art Clokey.

“In addition, Fox has acquired the full library of ‘Gumby’ animated series, specials, movies and content,” the announcement said. Ready for Gumby-mania? Bring it! I say.

No mention was made of the price Fox paid for this treasure trove (nor has it been reported), but whatever it was, the TV Blog believes this shrewd investment will be worth every penny.

How could it not? Gumby's distinguishing features rivet your attention -- including his unusual green, poseable body, and his prominent head in a shape for which no descriptive word seems to exist.

Except for the opinions of some sour outliers who feel Gumby is nothing more than an unctuous Pollyanna, he is beloved the world over.

In all seriousness (sort of), Fox's planned multipart Gumby revival is a great idea because it seeks to exploit a beloved brand that has gathered dust for years, but when dusted off could reap big dividends for the company.

Everybody of a certain age likely had a toy, bendable Gumby and/or Pokey at some point in their lives and now, a new generation is poised to enjoy the very same fun.

The fact is, there are a number of animated cartoon characters from the 1950s and ’60s whose unearthing and reimagining could also be well worth considering. “Courageous Cat and Minute Mouse 2.0,” anyone?

Fox’s Gumby revival may stem, at least indirectly, from an appearance Eddie Murphy made on “Saturday Night Live” on December 21, 2019.

Years before when he was a member of the cast of “Saturday Night Live” (from 1980 to 1984), his impersonation of Gumby as a bitter, cynical show business veteran became one of his most popular recurring comedy bits.

When he returned to “SNL” in 2019, he donned his Gumby costume once again, and even uttered the character’s famous catchphrase, “I'm Gumby, dammit!”

Murphy's revival of his Gumby act introduced Gumby to a new generation of fans who rewatched the bit thousands of times on YouTube.

Clearly, the time is right for a Gumby revival. And if that's the case, can “Davey and Goliath” be far behind?