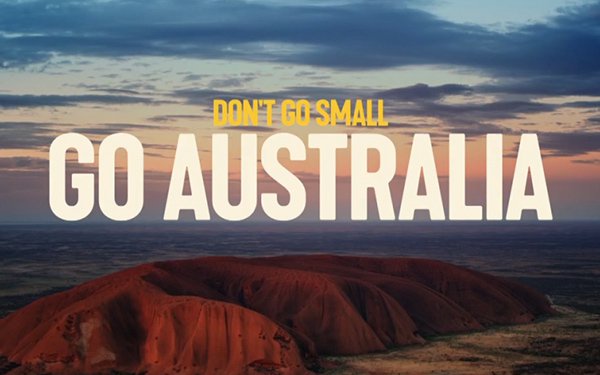 The “Don’t Go Small. Go Australia” campaign highlights the country’s most notable destinations and targets the U.S., U.K, Germany, France, Italy and Canada. The goal is to bring tourists back Down Under.

The effort is timed to Feb. 21, when international borders reopen to fully vaccinated tourists. This is the first Tourism Australia campaign since the pandemic and the country's 2020 bush fires. It begins with a 30-second ad.

The campaign will run across TV, print, digital and social channels in select markets, as well as tactical placements in landmark sites in New York, London and Paris starting Feb. 14. Australia’s most iconic destinations are showcased, such as the Great Barrier Reef, the awe-inspiring Uluru, also known as Ayers Rock, and the Sydney Harbour Bridge.

“The world has been waiting two years to get Down Under for a holiday and our latest ad campaign will remind them of what they’ve been missing,” said Dan Tehan, minister for trade, tourism and investment.

He added the new campaign is “just the first step in a long-term strategy to restart tourism to Australia.” Tourism Australia will ramp up investment in marketing campaigns in the second half of the year.

“We are inviting travelers across the world to think big, and say G’Day to the holiday they’ve been waiting for,” Tourism Australia Chief Marketing Officer Susan Coghill said.

Global media buying services for Tourism Australia is handled by IPG Mediabrands Universal McCann, which will service the account until September 2026.

Covid delivered a massive blow to the travel-tourism industry globally. In Australia for the 2020-2021 year, tourism gross domestic product (GDP) fell 37.9% in chain volume terms. In the financial year 2018–19, Australia generated $60.8 billion (U.S. $43 billion) in direct tourism GDP, according to the Australian Bureau of Statistics.