Twitter-Voted Fan Favorites To Be Featured During Oscars Telecast 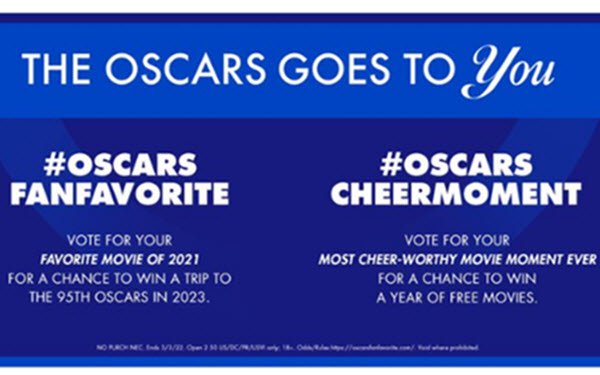 In the latest effort to boost plummeting viewership, the Academy Awards has partnered with Twitter to drive popular voting on favorite movies and scenes — with the results to be featured during this year’s live telecast.

The favorite movie pick — which need not be one of the films officially nominated for best picture by the Academy — will be announced on the show, set for Sunday, March 27.

Five popular-vote-winning scenes will also be shown during the ceremony, alongside fans’ tweets.

From Feb. 14 through March 3, fans can follow @TheAcademy and then vote their favorite movie of 2021, using #OscarsFanFavorite.

To help drive engagement, three favorite-movie voters will be randomly selected to win an all-expenses-paid trip to Los Angeles to present an award at next year’s Academy Awards ceremony.

Fans can vote for their favorite movie scenes between Feb. 24 and March 3, using #OscarsCheerMoment (or on oscarsfanfavorite.com).

Five of these voters will win prize packages that include a year’s worth of movie tickets, a year’s free subscription to several major streaming services, and swag from the Academy Museum Store.

“We’re thrilled to partner with Twitter to help build an engaged and excited digital audience leading up to this year’s ceremony,” said Meryl Johnson, vice president digital marketing at the Academy of Motion Picture Arts and Sciences, in a statement. “Through these activations, social media users around the world now have more opportunities to engage with the show in real time, find a community and be a part of the experience in ways they’ve never been able to before.”

Viewership for all awards shows has been declining for years. Last year’s Oscars telecast drew just 10.4 million viewers—down more than 56% from 2020’s 23.64 million, according to Nielsen.

The Academy tried introducing a “most popular film” category in 2019 in order to provide the opportunity for blockbusters or fan favorites not nominated for best picture to be included in the ceremony.

But the category was dropped after heavy criticism from Oscar voters and critics.