Think About This: Nearly A Quarter Of Americans Get Their News From Podcasts 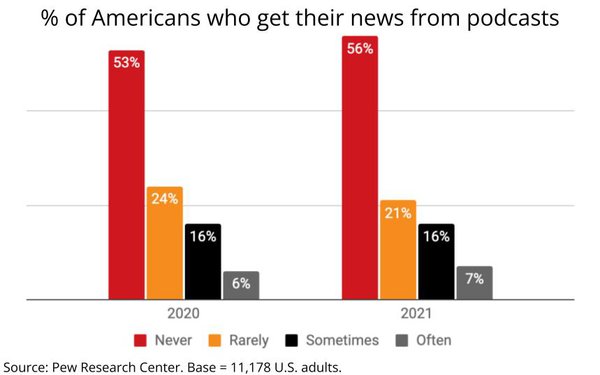 "Whenever the people are well informed, they can be trusted with their own government; that whenever things get so far wrong as to attract their notice, they may be relied on to set them to rights." -- Thomas Jefferson, 1789.

The issue of media literacy is as old as any democracy, but even our founding fathers could not have anticipated the impact digital media would have on how people source and vet the veracity of information they get from media.

And while misinformation has always been a part of that equation, it was at least easier to understand the source of information when you could hold it in your hands. The first time I understood the digital media effect on sourcing was when a source of mine -- a public relations researcher named Mark Weiner -- told me about a study that had found people accessing press releases via distribution services like the PR Newswire on pre-internet service Compuserve couldn't tell the difference between is content and news stories from the Associated Press. To them, they were both newswires appearing on their computer screens.

So when I saw a new study in my inbox this morning from Pew Research Center indicating that nearly a quarter of Americans get at least some of their news from podcasts, it seemed like a natural part of that progression -- and problem.

Don't get me wrong, there are some very fine publishers of news utilizing podcasting, even MediaPost.

And for every Joe Rogan out there, there's a Bob Garfield's Bully Pulpit.

The problem we know from other research is that misinformation, "fake news," and sensationalism play better than straight news or news analysis, which is one of the reasons Joe Rogan has a $100 million contract with Spotify.

Don't get me wrong, I believe entertainers like Rogan should be free to make as much money as they can merit, though I don't agree they should be free to do it by spewing misinformation that can harm people. And the problem is that many people no longer can tell the difference from bona fide publishers of news and information from the ones just trying to, you know, entertain you.

Whether it is Fox News' prime-time Gazpachos, or podcasters like Rogan, they're not reporting the news so much as performing an ancient rite of broadcast media sensationalism under the guise of journalism.

"It's just like talk radio," Bob Guccione Jr. told me recently when we were discussing what the late Roger Ailes and his benefactor Rupert Murdoch unleashed on the world.

By that, Guccione means the format and practice was well-honed as a radio genre (remember Rush Limbaugh, and a long list of conservative shock jocks before him?) long before Ailes and Murdoch ever brought it to TV, or before Spotify streamed it to a global audience.

While the format and genre aren't new, the power and distortion of digital distribution to amplify and distort things grows each day.

It's been some time since Pew also found that more Americans get their news from Facebook than get it from TV news outlets, so its new podcast study shouldn't be surprising. It's just more confirmation about the state of things, which to quote Garfield's speaking on a recent MediaPost misinformation roundtable, mean we are [expletive deleted].

There is some good news in Pew's new study. And some bad news too.

The good news is that the percentage of Americans who "never" get their news from podcasts has actually increased over the past year.

Another good finding is that in terms of its audience composition, podcast "news" listeners are just as equally likely to lean Democratic as they are Republican.

8 comments about "Think About This: Nearly A Quarter Of Americans Get Their News From Podcasts".
Check to receive email when comments are posted.
Read more comments >
Next story loading