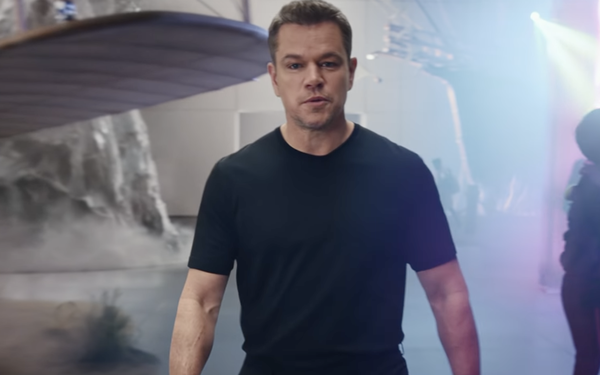 Image above: Matt Damon for Crypto.com

Even advertisers in the 2001 Super Bowl were a bit early for the ensuing crash -- the recession officially hit in March 2001 -- but the economy was already slowing by then. By early 2001, many of the 2000 Super Bowl advertisers -- including Computer.com, Epidemic.com,  OurBeginning.com and, most notoriously, Pets.com -- were out of business or had changed their focus.

Though many were quick to dub Super Bowl LVI the “Crypto Bowl,” you could just as easily call it “The EV Bowl,” since there were at least five companies -- GM, Hyundai, Volvo, BMW and Kia -- touting electric cars, not to mention an ad for the Wallbox charger.

But just as dot-com companies reached their apex of power in 2000, the money flowing from crypto in 2021/22 has been considerable. Analytics firm MediaRadar reported that crypto’s ad market went from 47 brands spending $16.9 million in advertising in 2020 to 142 brands spending $90 million in 2021. But just five -- Coinbase, Crypto.com, eToro, FTX and NYDIG -- comprised 92% of crypto ad spending.

Among the crypto Super Bowl advertisers, FTX appeared to be a standout. Twitter awarded the brand the Retweet Rusher, prompting a “river of retweets, reactions and convos,” though it was “a massive crypto giveaway tweet that really drove FTX’s stats into championship territory.”

That’s not to mention Budweiser’s Bud Light Next, which was backed by NFT drops, or Matt Damon’s Crypto.com ads, which were backed by a $100 million budget.

So does this mean that the Crypto Bowl is one-off and we’ll see a retreat in 2023? Not necessarily. According to Clark Moody Bitcoin Dashboard, only 10% of Bitcoin’s total supply is yet to be mined. Currently, the consensus among experts is that Bitcoin’s price will hit $100,000 this year, compared to a current price of $44,241.60 today.

As Protocol notes, “crypto’s advertising push is just getting started.”

On the other hand, there’s Binance, which is reportedly making a $200 million investment in Forbes and reportedly faces criminal probes by the U.S.Justice Department and the IRS.

According to Jef Loeb, CCO/creative director of Brainchild Creative, the dynamics are different this time. “The economics of dot-com was, start your .com and try and build brand as fast as you can and become an Internet instant millionaire,” he noted. “Which was really all about them trying to say, invest in our IPO when it comes out, we're on Super Bowl, we have to be viable and sustainable,” he said.

The crypto push "is attempting to build the base out at speed and scale at its speed," Loeb added. "So I think that's a  different kind of an approach. I would expect crypto is going to be around, whether or not it goes through the same market collapse.”

Despite its other issues, Binance is aiming to be the voice of reason in the category. On Feb. 13, it posted a video of the Miami Heat’s small forward Jimmy Butler telling fans to “trust yourself, and of course do your own research” and ignore all the big names during the Super Bowl advocating crypto investments. “But they don’t know you or your finances.”

Whether that’s counterprogramming against all the Super Bowl crypto hype or just good advice, it’s a message worth hearing today.