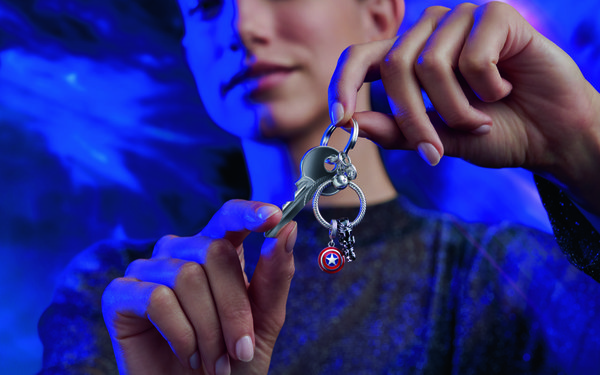 At this point, it’s hard to overstate just how strongly Marvel Entertainment fans feel about their superheroes. So Pandora is making it easy for them to wear their love on their sleeve -- or at least on their wrists and fingers.

The Marvel x Pandora collection includes both a bracelet and a ring, with charms honoring the Black Widow, Iron Man and Captain America’s shield, to name a few.

Pandora, the world’s largest jewelry brand, already does a brisk business in Disney charms, and says customers have been requesting Marvel charms for some time.

“These heroes excite, entertain and also encourage us to use our voices and powers without hiding our weaknesses, to make the world a better place,” says Stephen Fairchild, Pandora’s chief product officer. in its announcement. “Celebrating what you stand for and the things you love is what connects the Marvel and Pandora universes.”

The Danish company says it is supporting the new collection with a broad marketing effort.

Part of the launch includes a mini game, encouraging players to assemble their own team of heroes, with a mission to save the world. Every completed mission earns the player a chance to enter and win a Pandora bracelet.

A Pandora spokesperson tells Marketing Daily the campaign includes paid, owned and earned channels, “with a core focus to recruit new consumers to the Pandora brand.”

She says Pandora worked closely with Marvel to develop the campaign assets, as well as distributing it through Marvel’s channels, as well.

The collection is available both online and in its 2,600 stores. “And for super fans, we’ll of course also be available in Disney Parks,” she says.

How big is Marvel these days? Entertainment Weekly just reported that its “Spider-Man: No Way Home” just  officially knocked “Avatar” off its perch as the third-highest-grossing film at domestic box offices, grossing $761 million in U.S. and Canadian ticket sales, a record “Avatar” has held since 2009. And Marvel’s “Avengers: Endgame,” released in 2019, continues to reign in second place, with a domestic gross of $860 million. (“Star Wars: The Force Awakens,” released in 2015, is still in first place at $935 million.)