Just How Great Is The Metaverse? Not Very, According To Meta Super Bowl Ad 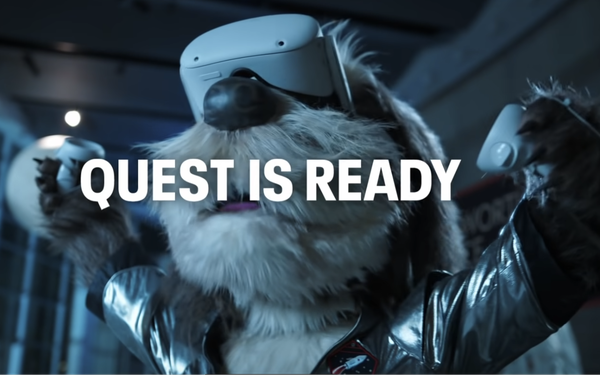 The company formerly known as Facebook went all-in on the metaverse in October, when CEO Mark Zuckerberg stressed that the concept was still “a long way off.

For some, the metaverse is merely an attempted distraction from Facebook’s disastrous fourth-quarter earnings report in February, which sent shares down by 20 percent or so.

The ad, via Anomaly, Los Angeles, starts off to the tune of Simple Minds’ 1985 hit “Don’t You (Forget About Me),” and features a nightmarish band made up of an animatronic penguin, a dog and some large pink, fuzzy thing playing the drums. They abruptly stop playing and the venue (dubbed “Questy’s”) goes dark. Then we see people assisting the dog and others out of Questy’s as sad music plays.

Then, the dog is in the window of a pawn shop, but still alive! Next we see the dog become a practice putt for miniature golfers and the audience for karaoke. Next thing you know, the dog is on a station wagon crammed with junk and then on the back of a truck, which it falls out of.

As we see the dog about to be crushed by the mechanism in a garbage truck, a woman pulls it out. Then the cleaned-up dog is at what looks like a trade show and a man nearby is wearing a virtual reality headset. The next shot is the dog with Meta’s Quest 2 VR headset on. Suddenly, the vantage point switches to the dog’s vision and we see him enter the VR world, which looks like a 1980s mall, dubbed Horizon Worlds.

In the final shot, the dog and his friends (the penguin and the weird pink thing) are all virtually meeting and having a great old time as the Simple Minds song plays.

What to make of this?

Obviously, it’s a metaphor for Facebook, which is now Questy’s. The hero’s journey goes from being nearly thrown away and crushed, to being resurrected fully in a virtual world.

The problem is, the virtual world doesn’t look very inviting. “Call me old-fashioned, but if I want to play Rock Band with my friends, I’ll pay a fraction of the cost of a VR headset, buy a couple six-packs of beer, and actually have friends over,” sniffed "The Federalist."

My prediction is that over the next decade, videoconferencing will improve to the point in which we’ll log into virtual spaces so realistic that they’ll "seem as if we’re physically in the same room,” according to The Wall Street Journal. This jibes with Bill Gates’ prediction that “most virtual meetings will move from 2D camera image grids to the metaverse, a 3D space with digital avatars.” Whether this will take off anywhere beyond its work function is another story.

As for Facebook’s audience moving from experiencing the social network on a PC to instead visiting it in VR, it’s plausible, but not very inviting in the way that Meta has presented it here.

I’m not saying the metaverse is a non-starter. It may work -- but the vision presented here is too sterile and antiseptic to seem like much fun. Right now, it seems like Meta’s version of Google Glass or MySpace.

ad campaign, meta, metaverse, super bowl
2 comments about "Just How Great Is The Metaverse? Not Very, According To Meta Super Bowl Ad".
Check to receive email when comments are posted.
Read more comments >
Next story loading