Study Explains Why 'The Social Network' Rebranded Itself As Meta 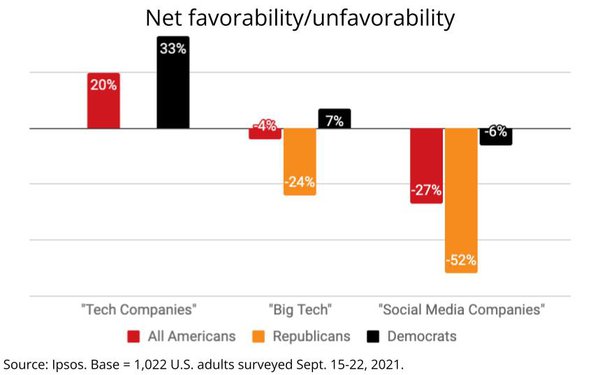 While Facebook's corporate rebranding as Meta -- and its repositioning as the developer of the metaverse -- may have been a wise move for the platform formerly known as "The Social Network," given some new research released Thursday by Ipsos.

To understand how various terms for big digital media technology platforms resonate among Americans, both overall and in terms of political sentiment, Ipsos measured the net favorability U.S. consumers have with the terms "tech companies," "Big Tech," and "social media companies."

Not surprisingly, the relatively benign, generic term "tech companies" has a net favorable perception among Americans overall, and Democrats in particular (Republicans, not so much), but modify it with "Big Tech" and perceptions skew unfavorable among the general population, and especially among Republicans.

Use the term "social media companies" and perceptions turn deeply negative for all Americans.

The study also found significant differences between Democrats and Republicans in terms of how much they trust that the "tech industry positively affects their lives." While a majority of Americans in both parties agreed, Democrats (81%) were much more likely than Republicans (68%).

"A similar pattern plays out across favorability towards specific companies, like Google, Apple and Facebook. Democrats, on the whole, hold a more favorable opinion of tech labels Ipsos tested, while Republican favorability across all tech terms tested does not surpass 50%," the study found, adding, "Brands, whose business model is closest to the problems of misinformation and content moderation, have more polarizing favorability among partisans."

2 comments about "Study Explains Why 'The Social Network' Rebranded Itself As Meta".
Check to receive email when comments are posted.
Read more comments >
Next story loading